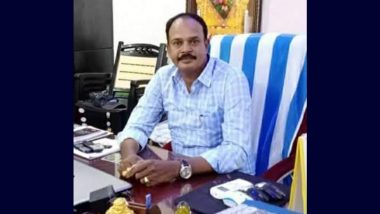 Subba Rao, the owner of a chain of private defence coaching centres in Telangana and Andhra Pradesh, and his three aides were also produced before the court by the Railway Police.

They were subsequently shifted to Chanchalguda Central Jail.

According to police, Subba Rao, an ex-serviceman, is the mastermind behind June 17 violence at Secunderabad station against Agnipath, the recently announced scheme of the Central government for army recruitments.

Subba Rao, who is director of Sai Defence Academy, allegedly instigated the army job aspirants to resort to violence.

After questioning him for the last couple of days, the police took him into custody on Friday and produced him along with his aides Malla Reddy, Shiva and B. C. Reddy. Agnipath Scheme Protest: One Killed, Three Injured After Railway Police Open Fire on Agnipath Protesters in Secunderabad.

An official said they have been booked under the Railway Act and various other sections of the Indian Penal Code.

According to police, Subba Rao, who retired as a medical assistant in the Army, was personally present in Hyderabad on the day the station was rocked by violence.

Superintendent of Police Anuradha said Subba Rao had reached Hyderabad from Narasaraopet in Andhra Pradesh a day before and stayed at a lodge in Boduppal on the outskirts.

He allegedly posted on WhatsApp group 'Hakimpet Army Soldiers' that he will extend all help for the violence at the railway station.

"Subba Rao asked his aides to bring youth to Secunderabad station," she said.

The mastermind also allegedly paid Rs 35,000 to the youth trained at Sai Defence Academy to create disturbances at the railway station.

The police investigation revealed that Shiva and Malla Reddy participated in the violence and informed Subba Rao about the same over mobile phone. The mastermind even watched the visuals of violence on television at the lodge.

Police said Subba Rao planned the violence as he feared that the Agnipath scheme would cause losses to his academy. He thought that by creating violence, the Central government can be forced to withdraw the scheme.

The police official said after the violence, Subba Rao tried to tamper with the evidence by deleting his message from WhatsApp.

Subba Rao allegedly instigated army job aspirants trained at his coaching institute and at other private coaching centres to resort to violence.

A day after the incident, he was detained by police in Andhra Pradesh and was brought to Hyderabad four days ago.

Hailing from Prakasam district of Andhra Pradesh, Rao started Sai Defence Academy in 2015. He opened another branch of his academy in Secunderabad recently.

Hundreds of youths protesting against Agnipath had gone on rampage at Secunderabad station on June 17. They set afire train coaches and locomotives, burnt transport goods, vandalised the station and damaged other railway property.

A protester was killed and 13 others injured when Railway Police opened fire to control the situation.

The police have already arrested 55 persons in connection with the violence. They include army job aspirants trained at Sai Defence Academy.

(The above story first appeared on LatestLY on Jun 25, 2022 05:45 PM IST. For more news and updates on politics, world, sports, entertainment and lifestyle, log on to our website latestly.com).