Declaring his intention to soon visit Ayodhya and Varanasi, Shiv Sena President Uddhav Thackeray on Wednesday said he was prepared to accept the 'One Nation, One Election' formula propounded by the Bharatiya Janata Party (BJP), provided the Prime Minister, all Chief Ministers and ministers keep off electioneering. 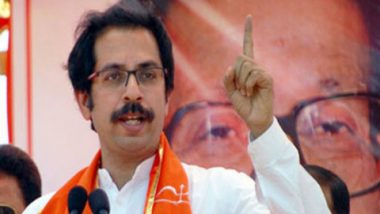 Mumbai, July 25: Declaring his intention to soon visit Ayodhya and Varanasi, Shiv Sena President Uddhav Thackeray on Wednesday said he was prepared to accept the 'One Nation, One Election' formula propounded by the Bharatiya Janata Party (BJP), provided the Prime Minister, all Chief Ministers and ministers keep off electioneering.

Justifying this contention, he said it was to ensure a level playing field for all the political parties, since after taking the oath as PM, CM or a minister, they represent the whole country and not just a particular group/party.

"My father, the late Balasaheb Thackeray, who first floated this theory, said it could ensure free and fair elections only if the elected representatives like the PM, CMs and ministers stay away from the election campaign. But, if you propagate for a particular party, then it is a crime in a democracy," Thackeray said.

Thackeray's comments came during his annual marathon three-part interview ahead of his 58th birthday on July 27 with Sena Rajya Sabha MP Sanjay Raut which was published as the 5,000-word final instalment in party mouthpieces 'Saamana' and 'Dopahar Ka Saamana' today.

He pointed out how, as per the Election Commission of India (ECI) norms, all government servants are strictly barred from any kind of election canvassing, and if caught, are dismissed. "Then why not their bosses (ministers, CMs, PM) be also held responsible in a similar manner?"

The Sena chief wondered how the PM, CMs and ministers are allowed to make big announcements or blatantly use public money to lure the voters.

"The PM goes and says he will give Rs.1.25 lakh crores for some project. Can any leaders of any other political party say this? There are restrictions imposed on all parties during elections, but you splurge public money for five years, not earned by you but by the efforts of the taxpayers This is not real democracy," Thackeray said.

However, he said that if the present rulers are dreaming that 'One Nation, One Election' could be a great opportunity "to fool all the people simultaneously, then they are badly mistaken, as the masses are watching".

Thackeray pointed out how, though Prime Minister Narendra Modi often speaks on the emergency and other global topics, he never discusses the Ram Temple issue, despite the BJP coming in power with a strong majority in the 2014 elections.

"Lord Ram's exile is not yet over. The BJP said that work on the Ram Temple will start soon, but nobody really knows when This means the 'Ram Temple card' will be played again during elections," Thackeray said.

The Sena chief said he would soon visit Ayodhya, as also Varanasi - Modi's Lok Sabha constituency - in deference to wishes from lakhs of people in north India, who wanted the late Balasaheb Thackeray to go there since the Shiv Sena had made many sacrifices for the Ram Temple.

"I shall go to Varanasi, Kashi, take part in the Ganga aarti and inspect how clean' the River Ganga has now become I shall go to Ayodhya for a darshan of 'Ram Lalla', and pray at the temple," Thackeray said.

He said details for his trip to Ayodhya, Varanasi and other north Indian regions will be announced shortly which would serve as an opportunity to boost the Shiv Sena presence there.

(The above story first appeared on LatestLY on Jul 25, 2018 06:42 PM IST. For more news and updates on politics, world, sports, entertainment and lifestyle, log on to our website latestly.com).