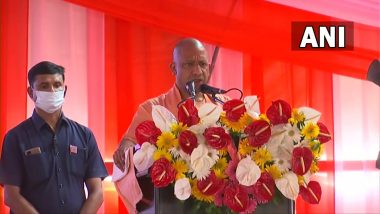 Lucknow, September 26: In a major decision barely months ahead of the upcoming 2022 Assembly elections, Uttar Pradesh Chief Minister Yogi Adityanath on Sunday announced a Rs 25 per quintal hike in the purchase prices of sugarcane in the state.

Addressing a meeting of farmers here organised by the BJP's Kisan Morcha, Adityanath said, "The government has decided that the variety of sugarcane for which Rs 325 per quintal was paid to farmers, that price has been increased to Rs 350, which will be paid to farmers."

Elaborating about the benefits, Adityanath said, "This will enable the sugarcane farmers to increase their income by 8 per cent, and will be a transformation in the lives of 45 lakh farmers." He also said that 119 sugarmills will be operated, and they will be linked with ethanol.