The Bharatiya Janata Party in Uttar Pradesh has finalised its alliance with the Nishad Party for the upcoming Assembly elections. 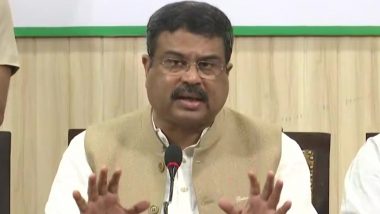 Lucknow, Sep 24: The Bharatiya Janata Party in Uttar Pradesh has finalised its alliance with the Nishad Party for the upcoming Assembly elections.

Talking to reporters, Union Minister Dharmendra Pradhan, who is the party's election in-charge for Uttar Pradesh, said that the alliance would further strengthen the BJP in the next elections. He said that apart from Apna Dal, the Nishad Party would be its ally now.

Pradhan said that he had toured the state and met people and was confident that the party would return to power with greater strength. Uttar Pradesh Assembly Elections 2022: BJP To Enroll Over 1.5 Crore New Members in the Poll-Bound State.

He said that all issues had been addressed and would be known to all at the appropriate time.

State BJP president Swatantra Dev Singh said that the three parties would contest the elections together. However, he did not mention about the seat sharing arrangement among the three.

(The above story first appeared on LatestLY on Sep 24, 2021 01:29 PM IST. For more news and updates on politics, world, sports, entertainment and lifestyle, log on to our website latestly.com).