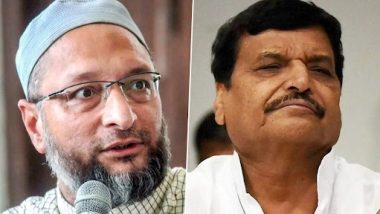 Lucknow, September 22: With new political equations emerging and disappearing almost every day in poll-bound Uttar Pradesh, the All India Ittehadul Muslimeen (AIMIM) chief Asaduddin Owaisi has called on Pragatisheel Samajwadi Party Lohia (PSPL) president Shivpal Yadav at his Lucknow residence. The two parties described the late Tuesday visit as a 'courtesy call'. Owaisi said, "Shivpal ji is a very senior leader of Uttar Pradesh. I just came to meet him. It was a courtesy call."

He refused to say whether the two had discussed any future political plans. Deepak Misra, a senior PSPL leader said, "One should not read too much into the visit. Is it not normal for leaders to meet each other socially?" This is third time that the two leaders have met in recent months. According to sources, Shivpal Yadav is still waiting for the Samajwadi Party to take a call on an alliance with his party. Uttar Pradesh Assembly Elections 2022: Asaduddin Owaisi Booked for Hate Speech in Barabanki.

"Shivpal is under tremendous pressure from his brother, Mulayam Singh Yadav, who wants his son, Akhilesh, and brother, Shivpal, to sink their differences and join hands before the elections. Akhilesh is taking his won time on the issue and Shivpal does not wish to jeopardize the move. Hence, he is non-committal on the issue with other alliances," said a source close to Shivpal.

Akhilesh Yadav, meanwhile, is said to be completely averse to any alliance with AIMIM since he views the party as a threat to the Muslim vote base of the Samajwadi Party.

(The above story first appeared on LatestLY on Sep 22, 2021 01:38 PM IST. For more news and updates on politics, world, sports, entertainment and lifestyle, log on to our website latestly.com).