Baghel was tossed in the air multiple times by the bull. 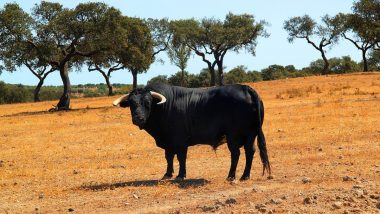 Agra, May 12: A stray bull gored a 37-year-old farmer to death in the Sewala Gaurva village of Agra district.

The victim, Jitendra Baghel, had grown melons on a rented field and was trying to keep it safe from stray cattle when a raging bull attacked him. Baghel was tossed in the air multiple times by the bull.

The body was handed over to the bereaved family by the police after the post mortem on Wednesday night.

Baghel was the fifth victim of stray cattle since January.

The farmer is survived by his wife and three minor kids, including a son.

Meanwhile, Sub-Divisional Magistrate J.P. Pandey said, "We have taken cognisance of the farmer's death. Tehsildar has been asked to submit a detailed report on the entire matter. We will ensure that the family of the victim gets required assistance under government welfare schemes."

(The above story first appeared on LatestLY on May 12, 2022 09:43 AM IST. For more news and updates on politics, world, sports, entertainment and lifestyle, log on to our website latestly.com).