Due to the massive fire rage, the temperature has continued to soar with no rainfall. The mercury level in Dehradun soared to 38 degree Celsius on Tuesday. 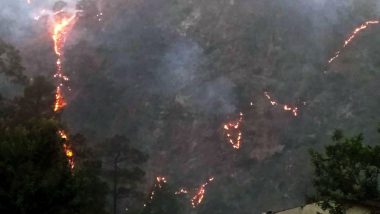 Dehradun, May 29: Massive forest fire continued to rage and spread in forests of Uttarakhand even this week. The devastating fires have broken out in the jungles of Almora, Nainital and fresh fire from the Tehri forest area on Wednesday. Firefighting operations are underway in the area with the forest department and fire brigade personnel on the spot. Due to the massive fire rage, the temperature has continued to soar with no rainfall. The mercury level in Dehradun soared to 38 degree Celsius on Tuesday. According to the Indian Meteorological Department, the temperature on Tuesday was an increase of three degrees from normal temperatures during this time of the year.  Uttarakhand Forest Fire Rages in State, Destroys Hundreds of Hectares of Land in Almora, Nainital, Tehri, Dehradun and Haldwani.

Forest fires are a common feature during summers in Uttarkhand where more than 70 percent of the area comes under forests. According to reports, the forest fire adjacent to district headquarters are blazing with fire, charring the trees and green area. As per data provided by the Forest Department, nearly 1,000 hectare of forests have been affected this season owing to forest fires at a number of places. This include 783 hectare of reserved forests where the fire incidents have taken place.

Take a Look at the Massive Forest Fire in Uttarakhand:

Forest Fire incidents have been reported in all the 13 districts of the hill state. Till May 13, Almora district is the worst affected, with 287 hectare of forests affected by the fires. According to IMD, clear skies are predicted for the next 3-4 days with temperatures expected to touch 40 degree Celsius.  Possible relief is predicted only on June 1 with partly cloudy skies forecast showing the possibility of development of thunder and lightning.

(The above story first appeared on LatestLY on May 29, 2019 08:54 AM IST. For more news and updates on politics, world, sports, entertainment and lifestyle, log on to our website latestly.com).