Heavy rainfall at isolated places is very likely over Andaman & Nicobar Islands on May 5. 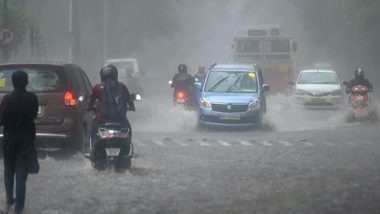 New Delhi, May 1: The India Meteorological Department (IMD) said on Sunday that a cyclonic circulation is likely to form over South Andaman sea and neighbourhood around May 4 which may result in heavy rainfall at isolated places over Andaman & Nicobar Islands on May 5.

"Under its influence, a Low-Pressure Area (LPA) is likely to form over the same region around May 6. It is likely to become more marked during subsequent 24 hours," an IMD bulletin said. Weather Forecast: Light Rain With Gusty Winds Likely in Parts of Delhi-NCR, Says IMD.

Heavy rainfall at isolated places is very likely over Andaman & Nicobar Islands on May 5. Squally wind (speed reaching 40-50 kmph gusting to 60 kmph) is likely to prevail over southeast Bay of Bengal and adjoining South Andaman Sea on May 5 and 6.

The IMD advisory asked the fishermen not to venture into these areas.

Depending on the energy of the system based on wind speeds, the LPA develops into Depression, then into Deep Depression and then into a Cyclonic storm or even stronger system such as Super Cyclonic Storm.

Normally, cyclones form over the north Indian Ocean in April and May, i.e. ahead of the monsoon.

(The above story first appeared on LatestLY on May 01, 2022 04:02 PM IST. For more news and updates on politics, world, sports, entertainment and lifestyle, log on to our website latestly.com).