West Bengal BJP has called for a state bandh, after one of its workers was killed in Cooch Behar. The party has accused TMC for killing a 55-year-old party worker. Police has however denied any political angle and said a tiff started between two clubs over financial issues that led to the death of the worker. 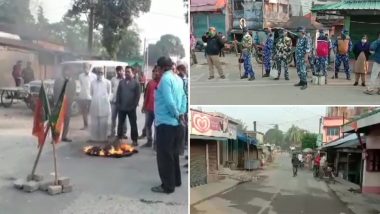 West Bengal BJP calls for a bandh (Photo Credits: ANI)
Kolkata, November 19: West Bengal BJP, on Thursday, called for a 'bandh' in the state. This comes after a party worker was alledgely beaten to death in  Cooch Behar on Wednesday. BJP has accused TMC for the same. It also claims that despite the complains, police is not taking any action against the TMC workers. "Our workers are constantly being killed by TMC but police is not doing anything. So, today's bandh is our protest against such killings," said a BJP worker. West Bengal BJP Calls for 12-Hour Bandh in Barrackpore Over Party Councillor Manish Shukla’s Murder.
A 55-year-old BJP worker was killed in Cooch Behar district on Wednesday.  The incident occurred in Shikarpur village in the Tufanganj police station area. BJP has claimed that TMC is behind the killing of the its party work. “Trinamool’s ‘murder politics’ continues in West Bengal! In Coochbehar, BJP booth secretary Kalachand Karmakar was brutally beaten to death by TMC goons. ‘Pishi, you cannot expect the people of Bengal to support your politics of blood and terror. Enough. Start counting your days,” West Bengal BJP tweeted. West Bengal: BJP-Calls for Bandh in Basirhat Against Party Workers Murder, Normal Life Hit.
However, the police has denied any political angle to the incident. "It is infighting. Two clubs had organised Kali Puja together this time. Over financial issues, few people of the clubs got involved in a fight outside Kalachand’s shop. Since Kalachand Karmakar was old, he did not survive after being hit continuously,” a police official told the Indian Express. A case has been filed against five people and one arrest has been made.

(The above story first appeared on LatestLY on Nov 19, 2020 10:56 AM IST. For more news and updates on politics, world, sports, entertainment and lifestyle, log on to our website latestly.com).