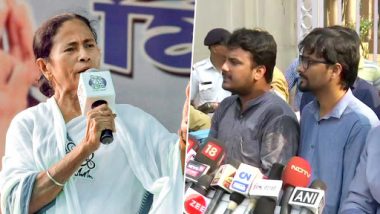 Addressing the press conference after the set deadline ended on Wednesday, Members of Joint Platform of Doctors said, as ANI quotes, "We demand adequate security in every medical college and hospital, and proper action against those who attacked doctors in NRS Hospital on June 10. We will resume working as soon as our demands are fulfilled." This conference was done after the doctors' delegation met the Governor in Kolkata. West Bengal: Mamata Banerjee Sets 4-hour Deadline For Striking Junior Doctors As Health Sector Deteriorates in State

With the junior doctors rejecting Banerjee's ultimatum, now the latter has written a letter to the senior doctors and professors of Medical Colleges and  Hospitals. In the letter, she had said, "Please take care of all patients, poor people are coming from all districts. I'll be obliged & honoured if you all please take full care of hospitals. they must run smoothly & peacefully."

West Bengal CM writes to Senior Doctors/Professors of Medical Colleges & Hospitals, states, "Please take care of all patients, poor people are coming from all districts. I'll be obliged & honored if you all please take full care of hospitals. they must run smoothly & peacefully," pic.twitter.com/sSl9JwpDjY

Earlier in the noon, the West Bengal Chief Minister - during her visit in the SSKM hospital - had asked the junior doctors to return to their work or vacate their hostel premises. She had said, "The government will not support them in any way. I condemn doctors who have gone on strike. Policemen die in the line of duty but the police don't go on a strike."

Adding more, she had said, "You have to give service to the people. You cannot be a doctor without providing service to the people. Similarly, police cannot call for a strike. It is their duty. It is unfortunate that the BJP and CPI(M) are doing politics here. They are playing Hindu-Muslim card here. Health minister Chandrima Bhattacharya met junior doctors on Wednesday and requested them to speak to me. I was holding the call but they just refused to talk to me over the phone."

However, the junior doctors' representative stated that Banerjee's tone was way too arrogant and it seemed that she doesn’t want a solution. Alleging that the TMC chief, instead of showing sympathy towards the junior doctors, threatened them to vacate hostels.

(The above story first appeared on LatestLY on Jun 13, 2019 04:27 PM IST. For more news and updates on politics, world, sports, entertainment and lifestyle, log on to our website latestly.com).