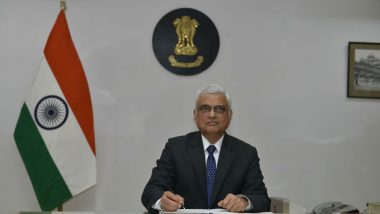 New Delhi, Aug 14: A day after the Bharatiya Janata Party (BJP) proposed to conduct elections in 11 states along with 2019 Lok Sabha polls, Chief Election Commissioner OP Rawat on Tuesday said the body doesn't have the required number of VVPAT machine to hold simultaneous polls in several states along with general elections.

The Election Commission would require 34 lakh ballot units, 26 lakh control units and 27 lakh VVPAT machines to hold Lok Sabha and Assembly elections simultaneously in 2019, according to a Times of India report.

The ruling BJP on Monday upped its demand for simultaneous assembly and Lok Sabha polls with its president Amit Shah writing to the Law Commission asserting that this would cut the huge expenses running into thousands of crore of rupees spent on elections.

(The above story first appeared on LatestLY on Aug 14, 2018 11:52 AM IST. For more news and updates on politics, world, sports, entertainment and lifestyle, log on to our website latestly.com).