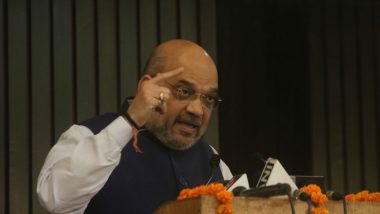 New Delhi, August 13: Bharatiya Janata Party President Amit Shah has written to the Law Commission urging One Nation One Poll. The letter by Shah comes a couple of months ahead of Assembly Elections 2018 in Rajasthan, Madhya Pradesh and Chhattisgarh. Shah has written that his party is in favour of one nation one election as that would save thousands of crores spent by the country for conducting polls.

"We have notified the Law Commission about our party’s support for simultaneous elections in the country. It would reduce expenses significantly & the repetitive use of election machinery. Necessary amendments to Constitution should take place," said BJP leader Bhupender Yadav.

Do you support the concept of One Nation One Election?

"There are over 9 lakh 30 thousand poll booths & over 1 crore workers are posted during polls. Rs 16-1700Cr were spent in 2011 polls & Rs 4000Cr in 2014 polls. One Nation One Election would reduce the cost. This exercise has been successful in several countries," he added.

BJP President Amit Shah’s letter to the Law Commission for One Nation One Election. #Delhi (1/2) pic.twitter.com/03uSQ5kAzw

BJP President Amit Shah’s letter to the Law Commission for One Nation One Election. #Delhi (2/2) pic.twitter.com/3NWZogpmzy

The BJP has been seeking all elections be held in one go instead of being held separately. Shah last week also said that there is a need for widespread consultation and pan-India discussion on the subject.

"The time has come for a public debate on whether we should move into simultaneous polls," Shah said. Due to recurring elections, the pace of development gets affected and governance gets hindered due to the imposition of model code of conduct, the BJP chief further added.

The AIADMK and the Congress, have, however, opposed the concept of One Nation One Election in the past. Speaking at an event last month in Chennai, senior Congress leader Jairam Ramesh had said that by supporting 'one nation one election', "you would deny yourself the ability to enforce some accountability of the executive."

(The above story first appeared on LatestLY on Aug 13, 2018 02:38 PM IST. For more news and updates on politics, world, sports, entertainment and lifestyle, log on to our website latestly.com).