Jammu And Kashmir: People's Alliance For Gupkar Declaration to Participate in PM Narendra Modi's All Party Meet on June 24

Mainstream political leaders who are part of the Peoples alliance for Gupkar declaration (PAGD), said on Tuesday that they will be attending the all party meeting called by Prime Minister Narendra Modi on June 24. 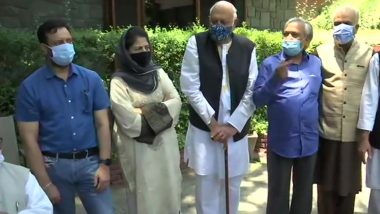 Srinagar, June 22: Mainstream political leaders who are part of the Peoples alliance for Gupkar declaration (PAGD), said on Tuesday that they will be attending the all party meeting called by Prime Minister Narendra Modi on June 24. The announcement was made by Dr Abdullah after the PAGD meeting, which was held here at the Gupkar Road residence of the NC patron.  PM Narendra Modi to Chair Meeting With All Political Parties in Jammu And Kashmir on June 24: Reports

"Since all of us are part of our political parties and we have received individual invitations, it has, therefore, been decided today that all of us will go and attend the Prime Minister's meeting", Dr Abdullah said. He added that there is no fixed agenda for the June 24 meeting and all of us are free to voice our demands and feelings.

M.Y. Tarigami, the CPI-M leader, who has also been invited to PM's meeting told the media, "We will not ask for the stars. We will only appeal to the Prime Minister to restore to us what is guaranteed by the Constitution". Muzaffar Shah, leader of Awami National Conference, said there is no change in the PAGD demand for restoration of statehood and the special status to J&K and this demand is non-negotiable.

Mehbooba Mufti said since the PAGD has decided that the invitation by the Prime Minister is on individual basis, she would also attend the meeting personally. At least 14 mainstream political leaders including four former chief ministers, Dr Farooq Abdullah, Omar Abdullah, Mehbooba Mufti and Ghulam Nabi Azad are among the invitees to the PM's all party meeting.

Others include, Sajad Lone of the Peoples Conference, Syed Altaf Bukhari of JK Apni Party, Professor Bhim Singh of J&K Panthers Party and others belonging to the BJP and the Congress in the UT. Three central ministers, home minister Amit Shah, defence minister Rajnath Singh and MoS (PMO) Jitendra Singh, will also attend the June 24 meeting to be held at the Lok Kalyan Marg residence of Prime Minister Narendra Modi.

(The above story first appeared on LatestLY on Jun 22, 2021 02:26 PM IST. For more news and updates on politics, world, sports, entertainment and lifestyle, log on to our website latestly.com).