PM Narendra Modi to Chair Meeting With All Political Parties in Jammu And Kashmir on June 24: Reports

Amid reports that New Delhi is extending invitation to all mainstream political parties in J&K, former chief minister, Mehbooba Mufti confirmed on Saturday that she has received the invitation while NC patron, Dr Farooq Abdullah said he is yet to receive it. 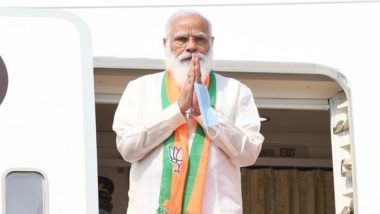 Srinagar, June 19: Amid reports that New Delhi is extending invitation to all mainstream political parties in J&K, former chief minister, Mehbooba Mufti confirmed on Saturday that she has received the invitation while NC patron, Dr Farooq Abdullah said he is yet to receive it.

Former chief minister, Mehbooba Mufti has confirmed that she has received a formal invitation from New Delhi for the meeting scheduled on June 24.  Jammu and Kashmir: Missing 4-Year-Old Girl Mauled to Death by Leopard in Budgam, Body Parts Found in Nearby Nursery

"Yes, I got a phone call from Delhi inviting me for a meeting on June 24. The meeting will be chaired by Prime Minister, Narendra Modi", Mehbooba told reporters.

She, however, added that she hasn't decided yet whether she would attend the meeting.

Dr Farooq Abdullah told some reporters that he hadn't received any invitation from Delhi so far.

"Once we receive such invitation, we will meet to decide the strategy to be adopted regarding the invitation", Dr Abdullah told reporters.

Sources close to People's Conference chief, Sajad Lone told IANS that he has also received the invitation to attend the June 24 meeting.

CPI-M leader, M.Y. Tarigami said he has so far received no formal or informal invitation from Delhi regarding the meeting.

Tarigami has said that sources in Delhi have confirmed to him that all mainstream leaders of J&K would be invited to attend the proposed meeting.

J&K Apni Party chief, Syed Altaf Bukhari said, "Solution to J&K's problems lies in New Delhi. We have stated openly that we have a relation with Delhi."

"Solution to J&K's problems lies in New Delhi and not in Islamabad, New York or London. Delhi's invitation to J&K's political parties is a welcome development".

Bukhari sarcastically added that all these parties called Apni Party the King's party so far. "Now who is the king's party?" he said.

He added that since job security and security to own land has been restored to people of J&K through the good offices of the Prime Minister and the Home Minister, statehood would also be restored in future.

(The above story first appeared on LatestLY on Jun 19, 2021 03:37 PM IST. For more news and updates on politics, world, sports, entertainment and lifestyle, log on to our website latestly.com).