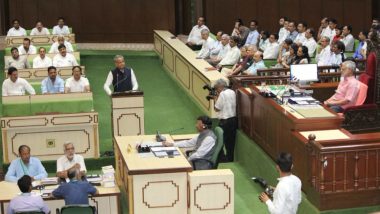 Jaipur, August 14: Chief Minister Ashok Gehlot on Friday won the trust vote in Rajasthan assembly, granting an immunity of at least six months to his Congress-led government in the state. With a confidence motion being won by the ruling side, the opposition is not mandated to seek another floor test for the next 180 days. Rajasthan Political Crisis: Sachin Pilot Reacts to New Assembly Seating Arrangement, Says 'Strongest Warrior is Sent to The Border'.

The voting in the confidence motion was not divided. A voice vote was held, which signalled an overwhelming victory for the Gehlot government. After the Speaker ruled in favour of the ruling side, he also announced that the House is adjourned till August 21.

Former Deputy CM Sachin Pilot, whose rebellion last month had led to a political storm in the state, backed the Congress on floor of the House. Ahead of the trust vote, Pilot led the party's attack on the opposition BJP.

"I was safe on the seat I used to sit on earlier. Then I thought why have I been allotted a different seat. I saw that this is the border - ruling party on one side, opposition on other. Who is sent to border? The strongest warrior," he said, after Leader of Opposition Gulab Chand Kataria accused of him attempting to bring down the government till a fortnight ago.

The vote of confidence which was brought by the govt has been passed with a very good majority today in the #Rajasthan Assembly. Despite various attempts by the opposition, the result is in favour of govt: Congress leader Sachin Pilot pic.twitter.com/IwIX6OVidw

During the trust vote, a total of 125 legislators backed the Gehlot-led Congress government. The numbers included 107 MLAs of the grand old party, along with 15 independents, 1 from CPI(M), 1 from Rashtriya Lok Dal and two from the Bharatiya Tribal Party.

Kataria, who had hinted that the BJP may fail in defeating the Chief Minister in the trust vote, predicted the fall of the Congress government in the future. The Gehlot-led regime may survive now, but the entire state knows that it "does not have a future", he had said.

(The above story first appeared on LatestLY on Aug 14, 2020 04:15 PM IST. For more news and updates on politics, world, sports, entertainment and lifestyle, log on to our website latestly.com).