"We will bring back the Bengal that made the entire nation proud," said Home Minister Amit Shah while unveiling the BJP's manifesto for the West Bengal Assembly Elections 2021. It focuses on several issues including women empowerment, development of backward and scheduled classes, arts & culture, tourism among others. 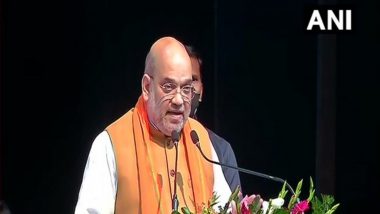 Kolkata, March 23: The Bharatiya Janata Party on Sunday released its manifesto for the upcoming assembly polls in West Bengal. Union Home Minister and Senior BJP Leader Amit Shah unveiled the 'Sonar Bangla Sonkolpo Potro' at EZCC in Salt Lake. The main focus in the manifesto lies in employment, strengthening social security schemes, women empowerment, ethic groups and the implementation of the Citizenship Amendment Act in the first cabinet meeting of the state government.

"We will bring back the Bengal that made the entire nation proud," said Home Minister Amit Shah while unveiling the BJP's manifesto for the West Bengal Assembly Elections 2021. It focuses on several issues including women empowerment, development of backward and scheduled classes, arts & culture, tourism among others. BJP List of Candidates For Assam Assembly Elections 2021: Check 70 Names Announced by Bharatiya Janata Party For Vidhan Sabha Polls.

Here are the Highlights of the BJP' Manifesto for West Bengal Assembly Elections 2021:

One of the highlights of the manifesto is the implementation of the CAA. "We have decided that we will clear the implementation of the Citizenship Amendment Act (CAA) in the first cabinet meeting itself, besides approving the Ayushman Bharat scheme for the benefit of the poor," said Shah. " The refugee families living here for 70 years will be granted citizenship. Every refugee family will be given ₹ 10,000 annually for five years through direct benefit transfer (DBT)," he added.

Amid the ongoing farmers' protest against the three agriculture law passed by the Union government last year, BJP in its manifesto for West Bengal has promised to provide arrears of Rs 18,000 to 75 lakh farmers of the state under PM-Kisan, the BJP promised Rs 10,000 per year for them, if voted to power, with Rs 6,000 being contributed by the Centre and the rest by the state. West Bengal Assembly Elections 2021 Dates: Polling in 8 Phases Between March 27 and April 29, Results on May 2; Check Full Schedule Here.

The Bharatiya Janata Party has also announced a Rs 5,000 Crore intervention fund to assure farmers' economic security, besides accidental insurance worth Rs 3 Lakh for small farmers and fishermen. A Rs 20,000 Crore corpus has also been proposed for agriculture infrastructure development in the state. The party has also promised for the free public transport for women and girls.

The saffron party's manifesto carries several women development centric promises including a 33 per cent reservation for women in the state government jobs. It proposes 'from KG to PG', a free education scheme for girl child and vows to make the state safer for women.

"Bengal has turned into one of the most unsafe states for women. Inaction for years has broken the dreams of the youth and has stopped the flow of employment. In the last 10 years, TMC's misgovernance has started a dark chapter in Bengal's history," said Amit Shah.

It also focuses on the development of scheduled and backward classes in West Bengal. The document proposes special bonds to SC, ST and OBC families for girls’ welfare. BJP's manifesto also promises to bring Mahishya, Teli and other Hindu OBCs under the scope of OBC reservation.

A Rs 1,000 crore fund to incentivise weavers, carpenters and tanners has also been proposed. For ST-dominated blocks, the Home Minister has proposed 200 days’ work under the MGNREGA scheme. The wage for tea garden workers was proposed to be increased to Rs 350 from Rs 176 per day at present.

On the healthcare front, the party proposed three new AIIMS — in north Bengal, Jangalmahal and the Sunderbans. A Rs 10,000 crore healthcare infrastructure fund was also proposed. Five Universities at par with the IITs and IIMs have also been promised to set up in West Bengal.

For promoting the art and cultural heritage of the state, the BJP in its manifesto has announced a Tagore Prize on the lines of the Nobel Prize, and a Satyajit Ray Award, on the lines of Oscar. A sum to Rs 11,000 Crore has been directed towards the development of art, literature and culture in West Bengal.

The manifesto promises to develop state's capital Kolkata into an international city. A Kolkata Development Fund worth Rs 22,000 crore has been proposed. It also promises to promote the city as a centre for financial services and ensured and also assured free electricity up to 200 units for domestic consumption in Kolkata.

The Bharatiya Janata Party in its manifesto has also proposed to keep a sum of Rs 500 Crore for ensuring a UNESCO Heritage City Tag for Kolkata. It has also promised to extend Kolkata Metro services to Serampore, Dhulagarh and Kalyani.

It also promises to set up Annapurna Canteen in West Bengal to provide subsidised cooked food three times a day at ₹ 5 per meal, besides subsidised ration will be provided through PDS -- rice or wheat at Rs 1 per kg, dal at Rs 30 per kg, salt at Rs 3 per kg and sugar at Rs 5 per kg.

Among others, a sum of Rs 1,000 Crore has been set aside for promoting tourism in the state and converting the famous Durga Puja in a international tourist attraction. It has also proposed a sum of Rs 20,000 crore Ishwar Chandra Vidyasagar Fund for the infrastructure development of schools.

(The above story first appeared on LatestLY on Mar 23, 2021 10:29 AM IST. For more news and updates on politics, world, sports, entertainment and lifestyle, log on to our website latestly.com).