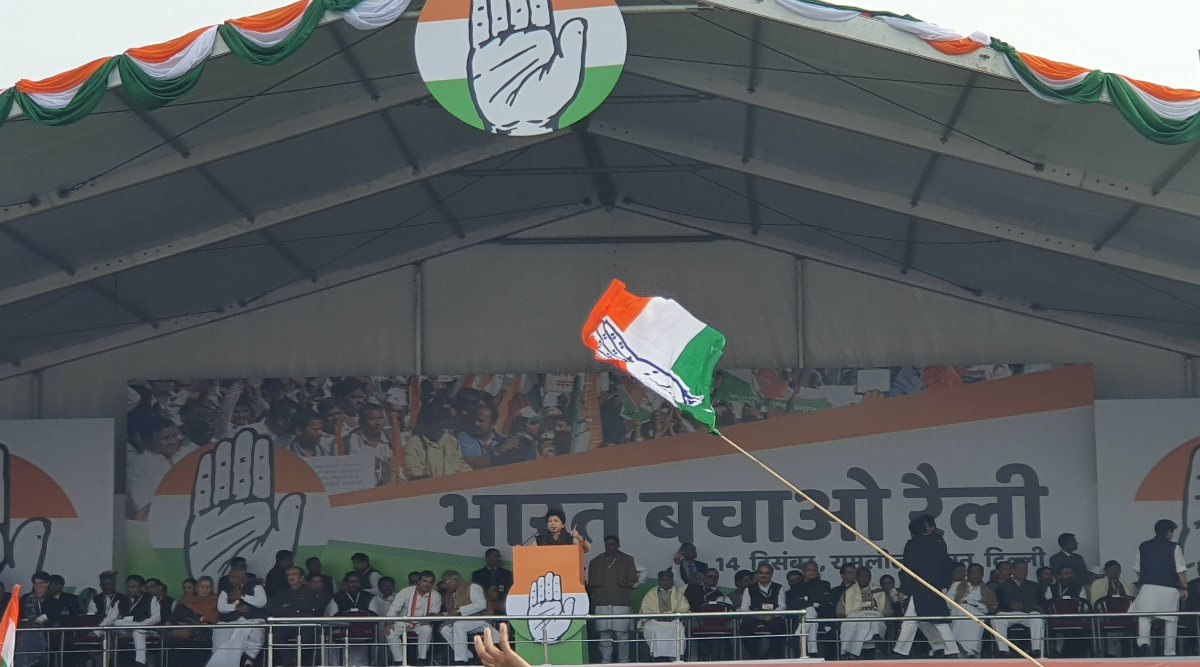 New Delhi, December 14: The Congress rally at the Ramlila Maidan, here, had different shades of India as several party workers dressed as degree holders were seen selling pakodas (fried snacks) and tea in an apparent dig at the central government over its failure to provide jobs.

Many Congress activists wore the dress meant to be worn on the convocation day to mock at Prime Minister Narendra Modi and Union Home Minister Amit Shah over rising unemployment, and sold tea and 'pakodas' near the rally venue.

Many party workers protested against the central government over the steep rise in prices and wore paper hats with image of gas cylinder with its price of Rs 885 written on them.

Many danced on drum beats and lyrics describing the failure of the Modi government in the last six years.

When Priyanka Gandhi begun her address the crowd went into tizzy and raised slogans. They clapped when Priyanka slammed the BJP over its slogan 'Modi hai to mumkin hai' (With Modi everything is possible).

The crowd cheered loudly when Priyanka mentioned the name of her father (former Prime Minister Rajiv Gandhi) while talking about the Unnao rape victim, who was burnt alive by the rape accused. "The blood of the Unnao daughter has mixed with the soil of country, much like my father's," she said.

Priyanka appealed the party activists to come out and fight to save the country. "Those who don't fight for justice will be remembered as cowards," she said.

A thunder of claps and cheers welcomed Rahul Gandhi when he came to address the meeting. They demanded him to come forward to lead the party again.

When the former Congress chief said, "I am not Rahul Savarkar but Rahul Gandhi. I won't apologise for speaking the truth," the Congress workers roared in unison -- Rahul bhaiya mat ghabrana, ham tumhare saath hai (Don't be afraid Rahul, we are with you), Rahul bhaiya tum party chalao (Rahul lead the party again).

Rahul Gandhi was taking a pot shot at the Sangh ideologue V.D. Savarkar (who reportedly sought to apologise to the British for release from jail) in connection with his "rape in India" remark.

The party workers assembled their were clearly sending across the message that they wanted Rahul Gandhi back as the party chief.

Rahul Gandhi quit the party's top post on May 25, two days after the Lok Sabha elections results were announced as the Congress could win only 52 seats.

The crowd also cheered former Prime Minister Manmohan Singh, who accused the BJP government of not fulfilling any of the promises it made to the people. He also slammed the government for misleading people by speaking lies.

Sonia Gandhi begun her address amid a thunderous applause and slogan shouting. "We are with you," the crowd greated her..

Sonia Gandhi urged people to come out to fight the government to save the country, the Constitution and the democracy.

The mega rally, in which the party's most top leaders participated, sought to raise various important issues, like the state of the economy, the Citizenship (amendment) Act, farmers' distress, revocation of Article 370 and unemployment across the country.