Days before the trust vote, the Supreme Court had on July 11 allowed rebel MLAs of the Congress and the JD(S) in Karnataka to appear before the Speaker of the Legislative Assembly to tender their resignations. 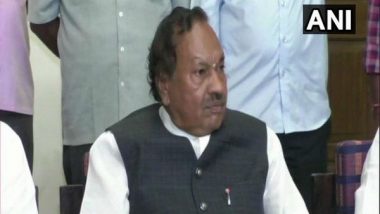 Shimoga, August 1: Hitting out at former Assembly Speaker KR Ramesh Kumar, former deputy chief minister of Karnataka and BJP MLA from Shimoga KS Eshwarappa on Thursday said the Supreme Court had directed Kumar to expedite resignation letters of the rebel MLAs, not to suspend them. "Former Speaker Ramesh Kumar was a self-styled saviour and protector of Indian constitution. He destroyed the values. Law experts like BV Acharya and Ashok Haranahalli explained the court order that the Supreme Court directed the speaker only to expedite resignation letters (of rebel MLAs) not on their suspension," Eshwarappa told reporters here. Karnataka: 14 Disqualified MLAs of Congress-JD(S) Move Supreme Court Against Speaker's Decision.

"Congress leaders like Siddaramaiah praised Ramesh Kumar. We didn't speak in the house. My political journey spans 30 years and for the first time, I was silent on their drama. Siddaramaiah wasted one day for explaining the point of order. Siddaramaiah became a minister in 1983 with the help of BJP but now he is blaming BJP, calling it communal. If any order and direction is favourable to them, only then Congress will consider it constitutional," he said.

Days before the trust vote, the Supreme Court had on July 11 allowed rebel MLAs of the Congress and the JD(S) in Karnataka to appear before the Speaker of the Legislative Assembly to tender their resignations. The court had directed the then Speaker to decide on the resignations on that day itself. Karnataka Congress Expels 14 Ex-MLAs Days After Their Disqualification From Assembly.

Later, Kumar disqualified 17 rebel MLAs before the Kumaraswamy government lost the trust vote in the state Assembly. When asked on BS Yeddyurappa-led government's decision to not celebrate Tipu Sultan Jayanti this year, the BJP leader said, "The cancellation of Tipu Jayanti is not because of a political vendetta, we are concerned for our people. Puttappa from Kodagu died in Tipu Jayanti clash. It is the responsibility of the Chief Minister to maintain law and order, so as a preventive step, we called off the celebration."