Prime Minister Narendra Modi is likely to reshuffle his cabinet of ministers in view of the upcoming assembly elections. Here's a list of contenders for the cabinet post. 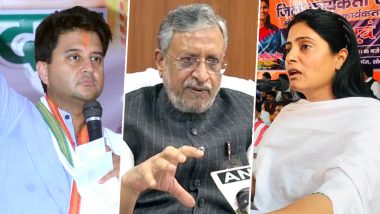 New Delhi, June 12: Prime Minister Narendra Modi is likely to reshuffle his cabinet of ministers in view of the upcoming assembly elections. According to reports, the cabinet expansion or reshuffle may happen by the end of this month or in early July. No reshuffle has taken place since the government took over on May 30 in 2019. PM Narendra Modi is reviewing performance of ministers and meeting senior leaders before the rejig. Cabinet Decision Augurs Well for Railways: PM Modi.

On Friday, PM Modi met Union Home Minister Amit Shah and BJP national president Jagat Prakash Nadda. Sources told news agency PTI that the Prime Minister had been meeting union ministers in different batches of late, and Nadda has also been present there. Apart from PM Modi, there are currently 59 ministers. Some ministers hold multiple portfolios. Here's a list of contenders for the cabinet post.

Congress turncoat Jyotiraditya Scindia helped the Bahratiya Janata Party (BJP) wrest power in Madhya Pradesh. His exit from the Congress, along with nearly two dozen MLAs, resulted in collapse of the Kamal Nath government last year. He may get a berth in PM Modi's cabinet.

Rajya Sabha member Sushil Kumar Modi is one of the hopefuls. Sushil Modi, who had earlier served as Deputy Chief Minister in the Janata Dal (United)-BJP government, was not inducted in Chief Minister Nitish Kumar's cabinet this time. The BJP sent him to the upper house of Parliament. His chances are bright because former union minister Ram Vilas Paswan's death has left a vacancy from Bihar. Moreover, Paswan's LJP has quit the NDA and the JD(U) has reportedly not demanded a cabinet seat.

Apndal Dal lawmaker Anupriya Patel is also among cabinet contenders. She was a minister in the first Modi government but was not inducted in the next. Her party is an important ally of the BJP in Uttar Pradesh. With assembly elections in Uttar Pradesh slated for next year, she may get a seat in PM Modi's cabinet.

Former Assam Chief Minister Sarbananda Sonowal could get a berth. While the BJP retained Assam after assembly elections this year, the party picked Himanta Biswa Sarma over Sonowal for the chief ministerial post. Sonowal was not even made a state minister. It is speculated that he may get a role at the centre.

(The above story first appeared on LatestLY on Jun 12, 2021 12:48 PM IST. For more news and updates on politics, world, sports, entertainment and lifestyle, log on to our website latestly.com).