BJP president Amit Shah, while speaking before Modi in the press meet, highlighted the steps taken by the Centre to improve the lives of agrarian, working and middle class. 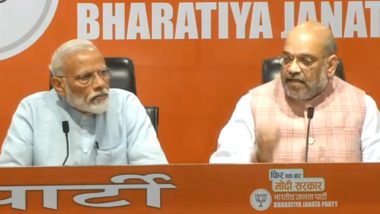 New Delhi, May 17: Prime Minister Narendra Modi, accompanied by BJP president Amit Shah, addressed his first-ever press conference in the last 5 years. The unprecedented interaction with reporters came shortly before campaigning for the final phase of Lok Sabha elections 2019 came to a draw.

Though it was the first-ever press conference attended by Modi in his prime ministerial term, all questions directed at him were answered by Shah on his behalf.

Modi highlighted the effectiveness of his government which has managed to simultaneously make arrangements for the Indian Premier League, the festival of Ramzan, the General Elections, along with other events.  'Will Never Forgive Sadhvi Pragya Thakur For Insulting Mahatma Gandhi': PM Modi

"In last 2 elections, even IPL couldn't be held. When government is strong, IPL, Ramzaan, school exams and others take place peacefully," Modi said, in an apparent jibe at the erstwhile UPA-led government at the Centre.

The PM, at the end of his current term, expressed his gratitude towards the electorate for granting him a full majority -- a phenomenon witnessed in Indian polity for the first time since 1984.

"I have come before you to thank the nation. With the country's blessings, I was elected with a massive mandate," he added.

Modi said one of the tallest achievement of his government has been the "last-mile delivery". Each day in the last five years, the PM claimed, the Centre has strove to provide benefits to the last person in the queue.

The question was answered by Amit Shah. The BJP chief categorically ruled out the charge, saying that the Opposition is levelling a baseless charge after being exposed in front of the public. "Countering the Opposition cannot be considered as lowering the discourse," he said.

Has BJP played a role in stoking violence in West Bengal?

Shah, who took the question, said the BJP is fighting elections in all constituencies and states. "Why no violence is being reported in other states? Why only Bengal, where TMC is contesting, violence has been reported? The media should counter-question Mamata ji," he said.

If Sadhvi Pragya Singh Thakur Wins From Bhopal, Will BJP Welcome Her?

The question was specifically directed at PM Modi. Shah, however, intervened and responded on the Prime Minister's behalf. "We have started the disciplinary proceedings. Appropriate action will be taken after receiving her response," he said.

In terms of electoral strength, the BJP has grown manifold since 2014, Shah claimed. "From 6 states in 2014, we are now in power in 16 states. At one time, we were in power in 19 constituencies."

Meanwhile, Congress president Rahul Gandhi addressed a simultaneous press conference in the national capital, calling the press meet being held by Modi as a "farce".

"No real journalist is being allowed to enter inside. The doors have been shut. Those who can question the PM are not being permitted inside," he alleged.

"Modi ji, let me come and ask you. Why don't you debate with me on Rafale? Why don't you answer the questions being raised by the Opposition," the Gandhi scion questioned.

(The above story first appeared on LatestLY on May 17, 2019 04:40 PM IST. For more news and updates on politics, world, sports, entertainment and lifestyle, log on to our website latestly.com).