With days left for the much-awaited assembly election in Punjab, the politics in the state, has become as uncertain as a T20 Cricket Match. The state, for the last few months has been witnessing a new political drama each passing day courtesy Sidhu and the possibility of a multi-cornered contest across the state looks certain. 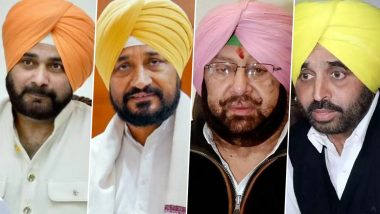 With days left for the much-awaited assembly election in Punjab, the politics in the state, has become as uncertain as a T20 Cricket match.

The state, for the last few months has been witnessing a new political drama each passing day courtesy Navjot Sidhu and the possibility of a multi-cornered contest across the state looks certain.  Punjab Assembly Elections 2022: From Amritsar East To Lambi Vidhan Sabha Seat; Here Are Seven Key Constituencies

Here are some of the key candidates in the elections:

The Chief Ministerial candidate for the Aam Aadmi Party in the State, Bhagwant Mann is a former comedian who appeared in the Great Indian laughter challenge's season 1, where he was judged by Navjot Singh Sidhu. He is a controversial figure in the politics of the state. His political controversies like live-streaming his entrance into the Indian parliament only comes second to his 'alcoholic' image in front of the people of the state. However, he announced in a rally that he took a new year's resolution of sobriety in 2019.

Charanjit Singh Channi, who is the current Chief Minister of Punjab, is a strong Dalit leader belonging to the Scheduled Caste. He is also Punjab's first Dalit Chief Minister. Post the resignation of Captain Amarinder Singh, his appointment by the Congress high command came as a surprise to many because he wasn't much influential outside Punjab. Since he was chosen over various other leaders of the party, he holds a firm ground to be the next CM face for Congress in Punjab.

Sidhu appears downcast post the announcement of Charanjit Singh Channi as the Congress chief ministerial face for the February 20 polls and has been keeping a low profile even as campaigning heats up. The Congress state chief appears to be dithering from campaigning outside his Amritsar East constituency, something that may not augur well with the party.

With the impending 2022 Assembly Elections, his ambitions once again have started soaring and getting the better of him. What remains to be seen is if and for how long will he be able to remain loyal to the Congress Party after Channi’s announcement as the face of Punjab Elections 2022.  Punjab Assembly Elections 2022: Navjot Singh Sidhu To Take On Bikram Singh Majithia In Amritsar East; Here Are Key Electoral Battles To Watch Out For In Punjab Vidhan Sabha Polls

A stalwart figure in Indian Politics, Captain Amarinder Singh comes from the royal family of Patiala and has served in Indian Army as a commissioned officer.

He has served as the 26th chief minister (Mar 2017 to Sep 2021) of Punjab. Prior to this, he served as chief minister of Punjab from 2002-2007. He is an elected Member of the Legislative Assembly from Patiala. Besides politics, Singh worked for the Indian Army from 1963 to 1966. Singh was born to Maharaja Yadavindra Singh and Maharani Mohinder Kaur of Patiala who belonged to the Phulkian dynasty of Sidhu Brar descent.

The 79-year-old has undeniably remained a towering presence in Punjab's political landscape for years even though his former party itself has withered away in many other parts of the country in recent times.

Despite the political downturn in the past few months, Mr Singh's image as a staunch patriot has stayed unblemished, evoking admiration even from ideological rivals.

Bikram Singh Majithia, former Shiromani Akali Dal minister and brother-in-law of its party chief Sukhbir Singh Badal, had made headlines for extracting a very public apology from Aam Aadmi Party(AAP) chief Arvind Kejriwal whom he had taken to court for accusing him of drug trafficking. Today, he is making headlines in election-bound Punjab with police issuing a lookout notice under the NDPS Act.

Scion of one of Punjab’s most powerful families, married into another, well-read, and known for both his wit, suave and muscular politics, Bikram Singh Majithia has had everything — and more — going for him. But will the drugs charge that he has so far dodged finally bring him down?

BJP’s Ashwani Kumar Sharma is a social worker by profession. The 57-year-old is Graduate and has total assets worth Rs 1.4 crore, and nil liabilities. His self-income is Rs 9.6 lakh and total income is Rs 14 lakh. He has not declared any criminal cases against himself.

Sukhjinder Singh Randhawa, who was leading the Congress race as the Chief Minister of Punjab barely few months ago was the Minister of Prisons and Cooperation in the Captain Amarinder Singh government. Randhawa's family has been associated with the Congress for a long time. He has also been the vice-president of Congress in the state and the state general secretary of the party. The talk of his becoming the CM seemed almost certain, but finally his name could not get the green signal from the high command. In the 2017 assembly elections, he was elected MLA from Dera Baba Nanak in Gurdaspur. He is a three-time MAL and has been elected MLA in 2017 after 2002, 2007. However, when speculations started to make Randhawa the CM and the media asked him whether he was talking to the future CM, he said- 'You are talking to a Congressman'.

Earlier, Randhawa has also taken an aggressive stand against the Badal family of Shiromani Akali Dal and their old Akali Dal-BJP coalition government. In the case of sacrilege with the holy Guru Granth Sahib in Punjab in 2015 and the death of two youths in police firing, he also raised the issue against not prosecuting the case.

(The above story first appeared on LatestLY on Feb 16, 2022 01:06 PM IST. For more news and updates on politics, world, sports, entertainment and lifestyle, log on to our website latestly.com).