Reiterating that he would accept any decision taken by interim Congress President Sonia Gandhi, Amarinder Singh termed the meeting with Rawat as fruitful, adding that the latter would take up the issues raised by him with Sonia Gandhi. The meeting between the two senior Congress leaders lasted for over an hour. 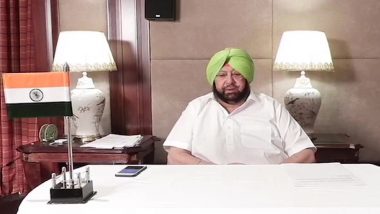 Chandigarh, July 17: Amid the 'tussle' over talks of appointing Navjot Singh Sidhu as the new state Congress chief, 'sulking' Punjab Chief Minister Amarinder Singh met Congress state in-charge Harish Rawat here on Saturday and categorically told him that he won't meet Sidhu until he apologises for his 'derogatory' tweets.

Reiterating that he would accept any decision taken by interim Congress President Sonia Gandhi, Amarinder Singh termed the meeting with Rawat as fruitful, adding that the latter would take up the issues raised by him with Sonia Gandhi. The meeting between the two senior Congress leaders lasted for over an hour.

Minutes after the meeting, Amarinder Singh's media advisor Raveen Thukral tweeted a statement by the CM that said: "Had a fruitful meeting with @harishrawatcmuk. Reiterated that any decision of @INCIndia President will be acceptable to all. Raised certain issues which he said he'll take up with @INCIndia president." Punjab Congress Feud: Any Decision by Party President Acceptable to All, Says Amarinder Singh After Meeting Harish Rawat.

"I have just returned to Delhi after meeting Amarinder Singh Ji. I am glad that a lot of the things that are being discussed have been proven pointless and Captain Sahib has reiterated his important statement that any decision taken by the Congress president will be acceptable to all," Rawat said in a tweet.

It has been reliably learnt that Rawat came to Chandigarh for a meeting between Amarinder Singh and his bete noire Sidhu, ahead of the official announcement of the latter's appointment as the state unit chief by Sonia Gandhi.

However, an adamant Amarinder Singh, who is reportedly upset with Sidhu for targeting his government over the power crisis and the sacrilege issue, categorically told Rawat that there would be no rapprochement between the two until Sidhu apologises in public for his 'derogatory tweets and interviews', a senior Congress leader told IANS.

Conveying the party's decision, Rawat informed the Chief Minister that there would be three to four working presidents of his choice along with Sidhu. He would also be free to revamp his Cabinet, Rawat reportedly told the Punjab Chief Minister. An announcement in this regard could be made anytime, he said.

Interestingly, amid the hectic political developments in Chandigarh, Sidhu, a former Cabinet minister in Punjab, called on state unit chief Sunil Jakhar at his residence in Panchkula, near here.

The duo held a meeting which is seen by the political circles as Sidhu's effort to take everybody along in the party after he is eventually appointed as the state unit chief.

After the meeting, Sidhu called Jakhar his ‘elder brother' and a ‘guiding force'. Jakhar, in turn, described Sidhu as a ‘capable man'.

Randhawa told the media after the meeting that "all is well in the party". "Seeking guidance of Presidents of the illustrious Punjab Pradesh Congress Committee, Conversations with wise men worth months of Education!!" Sidhu tweeted.

On Friday, Amarinder Singh had written to Sonia Gandhi, warning that the party would split if Sidhu is given charge of the state Congress. In his letter, the Chief Minister had said that he will not contest under Sidhu if he is elevated to the top organisational post in the state. The letter was delivered to Sonia Gandhi at her residence in Delhi before she met cricketer-turned-politician Sidhu on Friday.

(The above story first appeared on LatestLY on Jul 17, 2021 08:43 PM IST. For more news and updates on politics, world, sports, entertainment and lifestyle, log on to our website latestly.com).