Shatrughan Sinha who leaves no opportunity to mir into controversy against his own party was found applauding JD(S) HD Kumaraswamy for successfully proving himself the king of Karnataka. While he slammed BJP senior leaders for bringing embarrassment to the party. 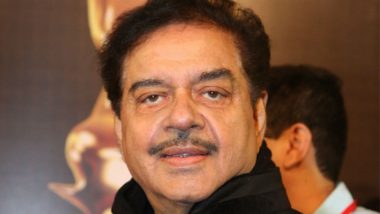 Mumbai, May 21: Actor-turned-politician Shatrughan Sinha, the rebel BJP lawmaker from Bihar, slammed his party leaders for the "embarrassment in Karnataka. In a series of tweets on Monday, Sinha found applauding JD(S)' leader and CM-designate HD Kumaraswamy for successfully proving himself the king of Karnataka. On the other hand, he accused the BJP of losing "moral standing" after attempting to form the government despite lacking the numbers.

Kumaraswamy has proven himself - that he’ll be King & not the King Maker! What a way to become King! Despite all objections, opposition & road blocks by King Kong & team. Congrats @hd_kumaraswamy & also @ghulamnazad & team for moving with electrifying speed to seal the deal..1>2

On the other end taking the jibe against BJP,  Sinha slammed party state senior leaders. He alleged that those who misled PM particularly must be held responsible and should be shown the exit door.

“Resounding embarrassment and loss of moral standing/face for our leadership. All those who misled Hon'ble PM, particularly those who declared victory in his presence, must be held responsible and shown the door.“

For all the spills in Karnataka Shatrughan Sinha in his tweet supported Yashwant Sinha for asking the resignation of Governor for masterminding Karnataka mess, as appropriate. Meanwhile, he added and said that former CM Siddaramaiah and JD(S) Chief Kumaraswamy gave a resounding slap to the constitutional saboteurs, who wasted time and energy of the nation and also damaged the reputation internationally, hitting at Vala further.

Karnataka shows there is still some morality left in politics but alas not in the BJP. Now the governor should also resign.

Yashwant Sinha has recently quit the BJP alleging that there was a 'threat' to democracy under the current dispensation led by the party. He also slammed PM Narendra Modi in a Press Conference earlier and demanded the resignation of Karnataka Governor Vala for the much embarrassment.

(The above story first appeared on LatestLY on May 21, 2018 01:34 PM IST. For more news and updates on politics, world, sports, entertainment and lifestyle, log on to our website latestly.com).