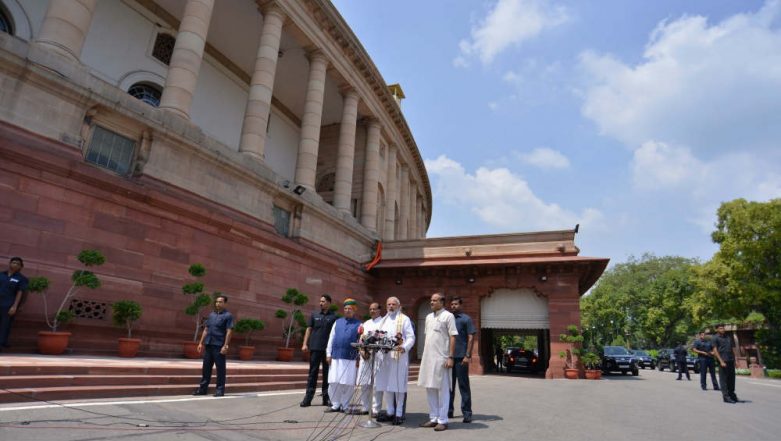 New Delhi, January 8: Prime Minister Narendra Modi led government on Tuesday tabled the Constitution (124th Amendment) Bill, 2019 in the Lok Sabha for 10 per cent reservation in jobs and educational institutions for the economically backward section in upper castes. Union Minister Thawar Chand Gehlot introduced the Bill in the lower house of Parliament. The Bill was approved by the Union Cabinet yesterday.

What Constitution (124th Amendment) Bill, 2019 Says: The Bill seeks to amend Articles 15 and 16 to extend the reservations in jobs and educational institutions to "economically weaker" sections among all castes and communities, Christians and Muslims included. At present, 50 per cent seats in government jobs and higher educational institutions are reserved. Of these 50 per cent, the Other Backward Classes (OBC) has 27 per cent share in the reservation pie, while Dalits and Adivasis together get 22.5 per cent. Reservation in India: A Look At The Mathematics of 50% Quota Across Categories.

Under clauses (4) and (5) of Article 15 and clause (4) of Article 16, the existing quotas are generally unavailable to upper castes unless they meet the specific criteria of social and educational backwardness. Article 15(4) of the Constitution states: "Nothing in this article or in clause (2) of Article 29 shall prevent the State from making any special provision for the advancement of any socially or educationally backward classes of citizens or for the Scheduled Castes and the Scheduled Tribes."

Article 16(4) of the Constitution says: "Nothing in this article shall prevent the State from making any provision for the reservation of appointments or posts in favour of any backward class of citizens which, in the opinion of the State, is not adequately represented in the services under the State.

What's Next? If passed in the Lok Sabha, the Constitution (124th Amendment) Bill will amend Article 15 and 16 of the Constitution under which the benefits of the existing reservations are generally not available for the economically weaker sections of upper castes.

Once passed in Lok Sabha, the Bill will be moved in the Rajya Sabha. The Bill needs to be passed by a special majority of two-thirds of members present in each House, not less than half the strength in both. Once passed by the Parliament, it will have to be ratified by at least half of the state legislatures.