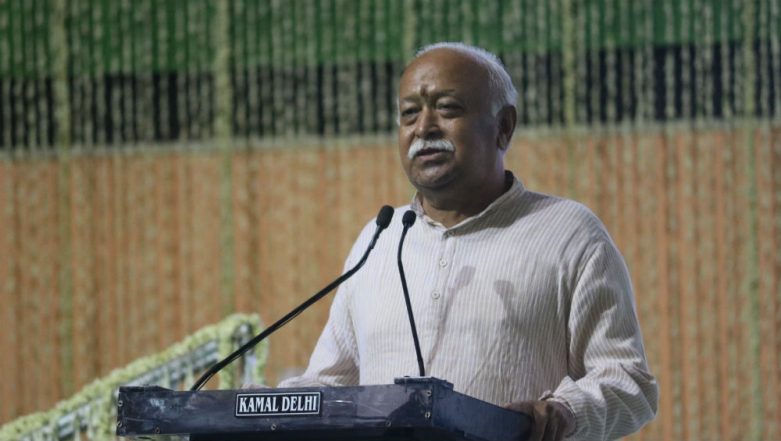 New Delhi, September 9: The BJP got a huge pat on its back on Monday from the RSS, it's ideological mentor for abrogating Article 370 and 35A of the constitution apart from getting an endorsement for the NRC. China, Pakistan Discuss Kashmir Issue, Beijing Opposes Any Unilateral Actions That Could Complicate Situation.

The RSS lauded the move with Dattatreya Hosabole, the Sah-Sarakaryavaah saying, "The centre abrogated Article 370 from the entire Jammu and Kashmir, recently. The entire nation is happy about it. Now, this part of India needs development. Many organisations including the Sangh for the last many years have been demanding one nation, one constitution, one flag."

Backing the government's narrative that the political class in Kashmir exploited the state for its own benefit, Hosabole said, "Previous governments would go to any extent to stay in power."

The Sangh also backed National Register of Citizen (NRC) which recently published it's final list in Assam. Harping on the exclusion of a sizable Hindu population including Assam Minister Himanta Biswa Sarma and many other leaders of BJP, the RSS accepted there are some "shortcomings" of NRC. It has "urged" the government to address those. The RSS has expressed how it will work in the bordering areas of the country to create an environment of nationalism.

Meanwhile, the Sangh has been cautious on its stand on reservation. Hosabole asserted, as long as social inequality will remain, reservation should continue. Recently a comment by its chief Mohan Bhagwat created a row when he welcomed for an informed discussion both for and against reservation.

Meanwhile, the RSS also threw its weight behind the government in curbing use of plastic. Its significant as its coming on a day the prime Minister himself reiterated his pledge to phase out single use plastic from an international forum of COP 14 in Greater Noida. Kashmir Issue: Pakistan Knocked on Several Doors, but Entire World Stood With India, Says Prakash Javadekar.

The Sangh concluded its three-day meeting, also known as Akhil Bhartiya Samnyay Baithak in Pushkar where it took stock of its work and the work of its affiliates. In total 36 organisations and 195 cadres attended this conclave in Rajasthan's Pushkar.