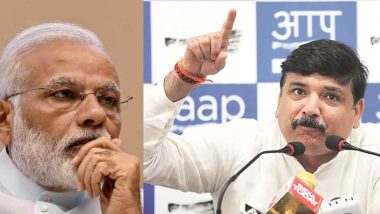 Hitting out at the PM Modi, Sanjay Singh took to Twitter and wrote, "Modi Ji, we are not fighting for our tea. We are fighting for the welfare of our farmers, which you have taken away. I humbly request you - I am returning your tea with all due respect, bread." Tea Diplomacy: PM Narendra Modi Lauds Rajya Sabha Deputy Chairman Harivansh For Serving Chai to Suspended MPs Who Protested Overnight at Parliament Lawn.

Echoing similar views, Leader of opposition in Rajya Sabha -- Ghulam Nabi Azad -- sought for the restoration of eight suspended MPs. He said, "No one is happy with the incidents that have taken place in this House...The public wants their leaders should be heard. No one can put across their views in just 2-3 mins. There will be 90% de-escalation if MPs not constrained by time to speak."

He also said that the opposition will boycott the Parliament Session till the revocation of suspension of 8 MP. Also, Azad sought the government to bring another bill under which no private player can purchase below MSP. Meanwhile, Opposition leaders stage walk-out from Rajya Sabha and protested before Gandhi statue in Parliament premises demanding revocation of suspended MPs.

It is to be known that Rajya Sabha Chairman M Venkaiah Naidu on Monday suspended eight parliamentarians for a week after the House witnessed huge ruckus over two farm-related bills. All the MPs were suspended for 'unruly behaviour' with the Chair. The MPs are Derek O Brien, Sanjay Singh, Raju Satav, KK Ragesh, Ripun Bora, Dola Sen, Syed Nazir Hussain and Elamaran Karim.

All the suspended MPs spent the night on the lawns of the parliament complex and declared that they were on an indefinite protest. On Tuesday they were offered tea by Rajya Sabha Deputy Chairman Harivansh, which they refused.

(The above story first appeared on LatestLY on Sep 22, 2020 10:18 AM IST. For more news and updates on politics, world, sports, entertainment and lifestyle, log on to our website latestly.com).