Shashi Tharoor Slams Pakistan for Targeting India on Article 370 Abrogation, Asks 'Who Gave Them The Right to Point a Finger Towards Us?' 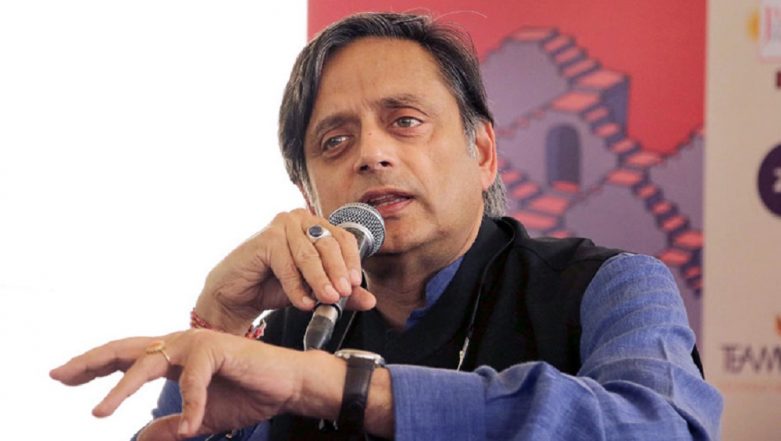 New Delhi, September 9: Weeks after asserting that there is no reason for Pakistan to draw comfort from Congress' stand on the issue of abrogation of Article 370 -- giving special status to Jammu and Kashmir -- Thiruvanthapuram Lok Sabha parliamentarian Shashi Tharoor once again slammed the neighbouring country asking "who gave them the right to point a finger towards us?" NSA Ajit Doval on Article 370 Repeal: Majority of Kashmir Supporting Move, 92.5% of J&K Freed of Restrictions.

Speaking to the media on the recent arguments of Pakistan, in which they alleged that Congress is against Article 370 abrogation, Tharoor said, "Pakistan has no locus standi as far as India's internal matters are concerned. We are in opposition, we can criticise the govt but outside India, we are one. We won't give even an inch to Pakistan."

He also cleared his stand on his joining Congress party. He said, "I did not come to Congress party because I had any lifelong career here, I came because I believed it is the best vehicle for the advancement of the ideas of inclusive & progressive India. We can not sacrifice those ideas merely for seats or votes." Article 370 Scrapped in Kashmir: Forces on Alert, NSA Ajit Doval Expected to Visit Valley.

Earlier in August, Tharoor had slammed Pakistan for drawing comfort from his comments. Tharoor had tweeted, "Spot on, Chief! This is what @INCIndia has insisted all along: J&K is an integral part of India; we opposed the manner in which Art.370 was abrogated because the way it was done assaulted our Constitution and democratic values. No reason for Pak to draw any comfort from our stand." UN Rights Chief Michelle Bachelet Asks India, Pakistan to Respect and Protect Human Rights of Kashmiris.