News agency ANI reported that four Delhi university students were booked on charges of stalking, criminal intimidation and intention to insulting the modesty of a woman. 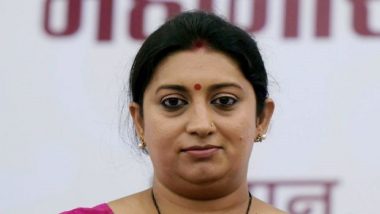 New Delhi, April 17:  A chargesheet was filed against four students of Delhi University by Delhi Police for allegedly misbehaving with and stalking Minister Smriti Irani in an incident from the year 2017, according to media reports.

News agency ANI reported that the Delhi university students were booked on charges of stalking, criminal intimidation and intention to insulting the modesty of a woman.

According to news reports in April 2017, almost a year ago, the drunk students allegedly followed Irani's car in Delhi. The students were detained by the police almost immediately after Smriti Irani dialled 100. Later, she filed a formal complaint and the police booked charges against the students.

The incident is said to have taken place when Smriti Irani was travelling home to her Chanakyapuri area residence. She was returning from Delhi IGI Airport, said the media report.

The medical report performed on the students had confirmed that they were under the influence of alcohol when the incident took place. A police official had said that they had tried to overtake the minister's vehicle.

(The above story first appeared on LatestLY on Apr 17, 2018 11:43 AM IST. For more news and updates on politics, world, sports, entertainment and lifestyle, log on to our website latestly.com).