T Raja Singh Says 'Not Using Facebook Since April 2019, How Can I Be Banned'

After Facebook banned him over content promoting hate, Telangana's lone BJP MLA T. Raja Singh said banning him made no sense as he had not been using Facebook since April 2019. 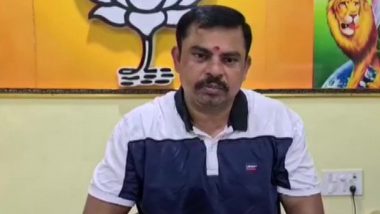 Hyderabad, September 3: After Facebook banned him over content promoting hate, Telangana's lone BJP MLA T. Raja Singh on Thursday said banning him made no sense as he had not been using Facebook since April last year. Raja Singh said his official Facebook page was removed and he had tweeted on April 1, 2019, wanting to know the reason from Facebook. Interestingly, the controversial legislator also tagged a letter dated October 8, 2018, and addressed to additional deputy commissioner of police, Hyderabad, complaining that his official Facebook page (RajaSinghOfficial) was hacked. Facebook Bans BJP Leader T Raja Singh For Violating Hate Speech Policy.

The letter also mentions that he received an email from Facebook stating that he was removed as admin from the Facebook page. Earlier, talking to reporters, he said he welcomed the Facebook ban on many accounts being run on the social media site in his name illegally. Reacting to reports of Facebook banning him, the controversial legislator said he was thankful to the social media giant for removing all accounts running illegally. He also urged Facebook to allow him to re-open his official account, which he alleged, was hacked in 2018. Facebook India Official Stopped Action Against BJP Leaders' Hate Speeches Citing Business Reasons, Says WSJ Report; Shashi Tharoor, Asaduddin Owaisi React.

"I have learnt that Facebook has removed all accounts in my name. My followers and workers had these accounts. Facebook has taken a good step because all these accounts and pages were being operated illegally without my knowledge," Raja Singh told reporters. "At the same time I request Facebook to permit me to re-open my official account. It was hacked in 2018. I am ready to submit the proof in this regard," he said. Singh said he would write to Facebook to request it to permit him to re-open his official account.

Facebook banned the MLA from Goshamahal constituency who is at the centre of a controversy that erupted after a report in "Wall Street Journal" that Facebook's content policies favoured the ruling Bharatiya Janata Party (BJP). The social media giant banned the legislator from its platform and Instagram for violating its policy that prohibits content promoting violence and hate. The action came amid mounting pressure on Facebook over its handling of hate content. The WSJ report quoted unnamed Facebook insiders that one of the India policy executives intervened in an internal communication to stop a permanent ban on Raja Singh after he allegedly posted communal, divisive content.

After the row broke out, Raja Singh had denied making any social media posts which have the potential to whip up communal passions. "There are many Facebook accounts in my name. I can't be held responsible for what they post. I can't stop them from posting something. If they like or share something, I can't be blamed for that," he had said.

(The above story first appeared on LatestLY on Sep 03, 2020 06:20 PM IST. For more news and updates on politics, world, sports, entertainment and lifestyle, log on to our website latestly.com).