The Election Commission of India (ECI) on Friday announced the schedule for the assembly elections in Tamil Nadu. 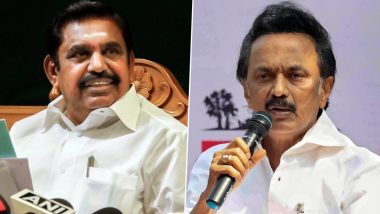 Chennai, February 26: The Election Commission of India (ECI) on Friday announced the schedule for the assembly elections in Tamil Nadu. As per the dates announced by the ECI, polling will  be held in single phase on April 6. The counting of votes will be held on May 2 and the results will be declared on the same day. Tamil Nadu has 234 seats. The term of the current legislative assembly ends on May 24, 2021. Kerala Assembly Elections 2021 Dates: Polling on April 6, Results on May 2; Check Full Schedule.

In Tamil Nadu, the electoral battle is between the ruling All India Anna Dravida Munnetra Kazhagam (AIADMK) and the DMK. The two rivals will be contesting without the state’s iconic leaders Jayalalithaa and Karunanidhi. Expelled AIADMK leader Sasikala and Kamal Haasan may be the X-factor. The AIADMK will contest poll in an alliance with the Bharatiya Janata Party (BJP). The DMK is sharing seats with the Congress. Tamil Nadu Assembly Elections 2021: MK Stalin Says ‘If Elected, DMK Will Dedicate First 100 Days of Govt To Solve People’s Issue’.

The AIADMK defeated the DMK in the 2011 assembly polls when former chief minister J Jayalalithaa led the party to a resounding victory. It won again in 2016 but lost 14 seats compared to 2011 election. It won 136 seats, whereas the DMK bounced back with a strong performance and bagged 89 seats, winning 66 more than it had won in 2011. DMK's ally Congress won eight seats.

(The above story first appeared on LatestLY on Feb 26, 2021 05:24 PM IST. For more news and updates on politics, world, sports, entertainment and lifestyle, log on to our website latestly.com).