The Election Commission of India (ECI) on Friday announced the schedule for the assembly elections in Kerala. 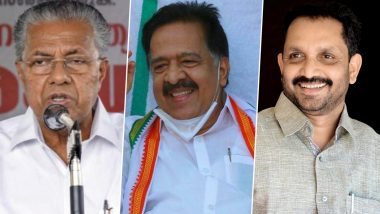 Thiruvananthapuram, February 26: The Election Commission of India (ECI) on Friday announced the schedule for the assembly elections in Kerala. As per the dates announced by the ECI, polling will be held in single phase on April 6. The results will be declared on May 2. In the 2016 assembly elections, polling was held on May 16. Kerala has 140 Assembly seats. In Kerala, the main electoral contest is between the Left Democratic Front (LDF), led by CPI(M), and the United Democratic Front (UDF), headed by the Congress. A party has to bag 71 seats to form a government. Tamil Nadu Assembly Elections 2021 Dates: Polling on April 6, Results on May 2; Check Full Schedule.

In the last elections, the Left Democratic Front emerged as the largest party by winning 91 seats. Pinarayi Vijayan was sworn in as the chief minister of the state on May 25. The Congress-led United Democratic Front bagged 47 seats, whereas the Bharatiya Janata Party (BJP) could win just one seat. An independent candidate also won who later joined the NDA. Kerala Assembly Elections 2021: CPI-M Slams Rahul Gandhi's Remarks on Gold Smuggling Case.

Both the LDF and the UDF have exuded confidence in the winning the upcoming assembly elections. Meanwhile, the BJP is confident of making giant strides in the election. During the 2019 Lok Sabha elections, the Congress-led UDF had a resounding victory, winning 19 out of the 20 seats, the ruling Left won just one seat. The BJP drew a blank.

(The above story first appeared on LatestLY on Feb 26, 2021 05:23 PM IST. For more news and updates on politics, world, sports, entertainment and lifestyle, log on to our website latestly.com).