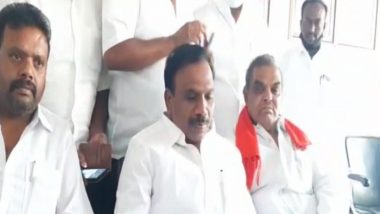 "In Cuddalore yesterday, I explained that I didn't speak ill about Edappadi K Palaniswami or his mother. I did so as I'm the 8th child to my mother. I came to know through media that CM was hurt. I apologize for the speech which was taken out of context," Raja said.

Speaking during the poll campaign at Chepauk-Thiruvallikeni, Raja said: "While Stalin was born out of a legitimate relationship and through a normal delivery, Palaniswami was born out of an illicit relationship and through a premature delivery. A doctor from Delhi, Prime Minister Modi is giving a healthy certificate to this premature baby by holding his hand." Tamil Nadu Assembly Elections 2021: VK Sasikala, Expelled AIADMK Leader, Performs Puja at Temple in Rameswaram.

Responding to the DMK leader's remarks, the AIADMK has now requested the Election Commission of India to register a case against Raja. The Assembly elections in Tamil Nadu will be held in a single phase on April 6 and the counting of votes will be done on May 2.

Polls will be held for 234 seats in the state with the Congress-DMK and BJP-AIADMK alliance being the major groups contesting against each other.