Maurya said that the 'immature behaviour' of Gandhi was for all to see as he had embraced Modi in the Lok Sabha and also gave statements that even a child would not. 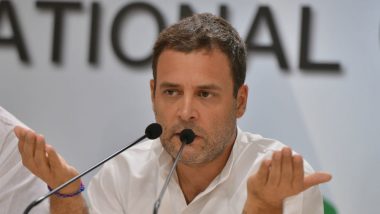 Lucknow, Sep 28: Uttar Pradesh Labour Minister Swamy Prasad Maurya on Friday lashed out at Congress President Rahul Gandhi for attacking Prime Minister Narendra Modi, and called him a "mad man who doesn't deserve to lead India's oldest political party". "Rahul Gandhi has been continuously calling the Prime Minister a thief. Look at the decency of Modi that he is not (even) responding," said Maurya, who switched sides from the Bahujan Samaj Party (BSP) to the Bharatiya Janata Party (BJP) before the 2017 Assembly elections. BJP Takes 'Chinese Gandhi' Dig at Rahul Gandhi's Kailash Mansarovar Yatra Via China, Congress Hits Back.

"It is a matter of great shame that the Congress leader is mouthing such (abusive) language for the country's Prime Minister," the Minister told reporters on the sidelines of an event in Mainpuri. He said that "this childish behaviour did not behove of the Congress chief", adding that the opposition party should be worried since this will invite public ire.

Maurya said that the "immature behaviour" of Gandhi was for all to see as he had embraced Modi in the Lok Sabha and also gave statements that even a child would not. The Minister also said that the vicious Congress campaign on the Rafale deal will not cut into BJP victory prospects in the 2019 Lok Sabha elections. Rahul Gandhi Faces Flak as News Channel Mistranslates His Tweet on Atal Bihari Vajpayee's Demise.

(The above story first appeared on LatestLY on Sep 28, 2018 05:07 PM IST. For more news and updates on politics, world, sports, entertainment and lifestyle, log on to our website latestly.com).