Reports inform that the woman slapped Palanpure allegedly in an argument over a post in the Panchayat. 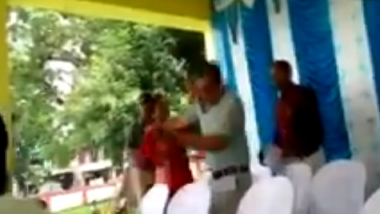 Bhopal, June 13: In a bizarre incident,  a former Block President Ranjita Paraste of Dindori's Karanjia in Madhya Pradesh was caught on camera slapping an officer. According to a recent video by ANI, Ranjita is seen manhandling and slapping RK Palanpure, who is the Chief Executive Officer of Janpad Panchayat.

Reports inform that the woman slapped Palanpure allegedly after an argument over a post in the Panchayat.

#WATCH: A former Block President Ranjita Paraste of Dindori's Karanjia manhandles and slaps Chief Executive Officer of Janpad Panchyat, RK Palanpure allegedly in an argument over a post in the Panchayat. #MadhyaPradesh pic.twitter.com/cfINs13la5

Earlier this week, a BJP MLA from Madhya Pradesh sparked a controversy after he was caught on CCTV camera slapping, abusing and threatening to kill a constable inside a police station in Dewas. Reports inform that a case has been registered under Sections 353 and 332, while an investigation into the matter is underway.

A similar incident had taken place in January this year where Madhya Pradesh chief minister Shivraj Singh Chouhan landed himself in a controversy after a video clip of him slapping a person went viral. Reports informed that the incident took place during a rally in Sardarpur and it was reportedly his bodyguard, whom he slapped.

(The above story first appeared on LatestLY on Jun 13, 2018 10:02 PM IST. For more news and updates on politics, world, sports, entertainment and lifestyle, log on to our website latestly.com).