Police has registered an FIR against West Bengal Assembly's Leader of Opposition Suvendu Adhikari and his brother Soumendu Adhkari for "stealing relief materials" from Contai municipality in East Midnapore. 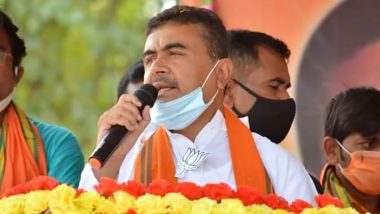 The FIR was registered on Sunday evening on the basis of a complaint by Ratnadip Manna, a Member of the Board of Administrators of Contai Municipality on May 29.  Suvendu Adhikari Close Aide Rakhal Bera Arrested for Alleged Role in Fake Govt Job Scam: Police

According to the complaint by Manna -- Himangshu Manna and Pratap De took away a truckload of tarpaulin worth Rs 2 lakh from the official godown of Contai Municipality meant for Cyclone Yaas devastation relief.

The complainant alleged that the act was the result of a criminal conspiracy led by TMC-turncoat Suvendu Adhikari and Soumendu Adhikari, who are now in BJP.

The complainant further stated that the alleged theft was carried out with the help of the Central Armed Forces.

Acting on the complaint police have already arrested Pratap De and he was taken on police remand for further interrogation.

As per the intelligence collected by police so far, the relief materials taken by the accused persons were distributed in cyclone-affected areas in Nandigram.

Though Adhikari was not available for comment BJP leadership alleged that the Trinamool Congress was taking a vindictive stance. "They are killing our supporters and trying to put our leaders behind the bars," a senior BJP leader said.

A day before the FIR, on Saturday, Rakhal Bera -- another close associate of Suvendu Adhikari was booked, on the basis of an allegation by one Sujit Roy, who alleged that he was duped of Rs 2 lakh by Bera and his accomplice Chanchal Nandi, who promised him a job in the Irrigation and Waterways ministry. The duo allegedly began the racket in 2019.

Chanchal Nandi is there in the FIR as well. East Midnapore police are on the lookout for Nandi and another aide of Adhikari named Himanshu.

(The above story first appeared on LatestLY on Jun 07, 2021 01:53 PM IST. For more news and updates on politics, world, sports, entertainment and lifestyle, log on to our website latestly.com).