Why PM Modi 'Did Not Name China' in Address to Jawans in Ladakh? Congress' P Chidambaram Asks 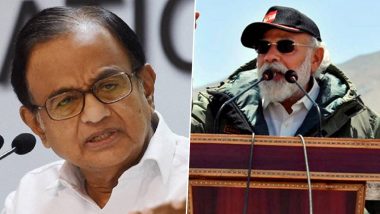 New Delhi, July 3: Prime Minister Narendra Modi's address to jawans in Ladakh, amid the border standoff with China, evoked a critical response from Congress, the primary Opposition party in India. Senior party leader and former Union Home Minister P Chidambaram asked Modi to explain why he did not name China during his tirade against the adversarial neighbour.

Chidambaram, while critiquing Modi's address in a series of social media posts, sought to know what purpose would the PM's speech serve if the neighbouring aggressor is not named. Age of Expansionism is Over, This is the Age of Development, Says PM Modi in Swipe at China.

"For the third time in a week, PM did not name China as the aggressor, why What is the purpose of talking about an unnamed ‘enemy’ to the people of India and the jawans in Ladakh?" he tweeted.

Chidambaram further asked the Prime Minister to explain why the questions raised by the Opposition parties related to Galwan Valley clash were not answered yet.

The Congress has also demanded the government to explain whether the purported free-source satellite images - which suggest Chinese intrusion into the Indian side of Line of Actual Control (LAC) - are reflective of the ground realty.

"PM has still not answered our questions about where the violent clashes took place on June 15-16 between Chinese and Indian troops and if the Chinese have intruded into Indian territory at several points," Chidambaram wrote on social media.

Nor has the government answered our questions on the satellite images showing Chinese troops occupying key positions in places hitherto considered as undisputed Indian territory.@rajnathsingh

The Congress veteran, in another stinging tweet, asked the Prime Minister whether he had named China while discussing the LAC standoff with Russian President Vladimir Putin and US President Donald Trump. "When

@narendramodi spoke to Mr Trump and Mr Putin, did he name China as the intruder or not? I just wonder (sic)," he said.

Modi, in a surprise visit to Nimu region in Leh - located nearly 250 km away from the Galwan Valley - addressed the soldiers and other senior military officials. He lauded the valour of Indian jawans who were martyred in the physical clash that erupted with the Chinese counterparts in Galwan Valley on June 15.

Without naming China, the Prime Minister said the policy of expansionism will be thwarted by India. He further added that Indians are strong proponent of peace, but their pursuit of peace is based on strength. "The commitment towards peace should not be considered as sign of weakness," he said.

"Age of expansionism is over, this is the age of development. History is witness that expansionist forces have either lost or were forced to turn back," Modi added.

(The above story first appeared on LatestLY on Jul 03, 2020 08:59 PM IST. For more news and updates on politics, world, sports, entertainment and lifestyle, log on to our website latestly.com).