On a day when the Calcutta High Court snubbed the West Bengal government for its 'inaction' over the post-poll violence in the state, Bengal Governor Jagdeep Dhankhar met Union Home Minister Amit Shah in the national capital on Saturday for the second time in 48 hours. 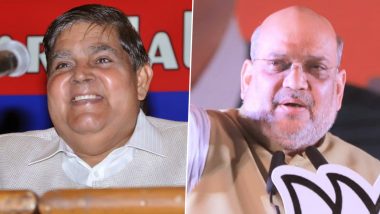 Kolkata, June 19: On a day when the Calcutta High Court snubbed the West Bengal government for its 'inaction' over the post-poll violence in the state, Bengal Governor Jagdeep Dhankhar met Union Home Minister Amit Shah in the national capital on Saturday for the second time in 48 hours.

"I want everyone to rise to the occasion and try to wipe the tears of those families and people who have to leave their houses, whose near and dear ones have been killed, injured, whose houses have been subjected to arson and loot. We cannot survive in a democracy if people have to pay extortion fees to run their small business," Dhankhar said after his second meeting with Shah at the latter's residence on Saturday.

His meeting with Shah came at a time when Banerjee and Dhankhar have been at the loggerheads over a range of issues. Over the past few weeks, Dhankhar has raised concerns over the alleged incidents of political violence in West Bengal.

Dhankhar had sent a report on the violence to the Centre soon after the Bengal polls. Before his Delhi visit, he had slammed Banerjee over her handling of the violence.

On its part, the state government said that the post-poll violence was "somewhat unabated" when the Election Commission was in charge of law and order in Bengal, adding that the cabinet restored order once the oath ceremony was over.

The Trinamool Congress was quick to react to Dhankhar's meetings in the national capital. In a press conference, senior Trinamool leader and MP Sukhendu Sekhar Roy said, "There is absolute peace and law and order in the state. In spite of that, one who is complaining is doing this with an ulterior motive and it has got a political intention."

"For this reason, he (Dhankhar) is roaming about in Delhi for the last five days so that he can present a wrong picture of West Bengal and its people. But the people of Bengal will never accept this intentional propaganda to show the state in a poor light in front of the country," he added.

Earlier on Saturday morning, the Calcutta High Court criticised the Mamata Banerjee-led government, saying that the state did not take any concrete steps to address the complaints pertaining to post-poll violence.

(The above story first appeared on LatestLY on Jun 19, 2021 08:57 PM IST. For more news and updates on politics, world, sports, entertainment and lifestyle, log on to our website latestly.com).