West Bengal Governor Jagdeep Dhankhar, who is on a visit to the national capital, has created a buzz in the Congress circles after meeting Adhir Ranjan Chowdhury at his residence here. 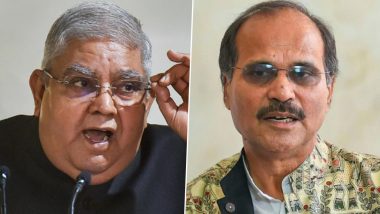 New Delhi, June 18: West Bengal Governor Jagdeep Dhankhar, who is on a visit to the national capital, has created a buzz in the Congress circles after meeting Adhir Ranjan Chowdhury at his residence here.

Dhankhar dropped at the Chowdhury's residence on Thursday evening and later tweeted: "While in Delhi today had over a cup of coffee interaction @adhirrcinc Adhir Ranjan Chowdhury, leader of the Indian National Congress in the 17th Lok Sabha and the Member of Parliament from Berhampor."  West Bengal: CM Mamata Banerjee Takes a Dig at Governor Jagdeep Dhankar, Says ‘A Child Can Also Be Snubbed, Made Quiet’

Though the tweet suggested a courtesy visit, the Congress circles were left guessing about the nature of the meeting. While Chowdhury did not respond to the messages on the issue, sources said that it was a courtesy visit.

Dhankhar has been at loggerheads with West Bengal Chief Minister Mamata Banerjee over the 'deteriorating' law and order situation in the state.

Dhankhar also met President Ram Nath Kovind on Thursday morning, and the details of the meeting are not known.

Dhankhar, however, maintained that his visit to the President was a courtesy call.

This was the first meeting between Dhankhar and Shah after Chief Minister Mamata Banerjee retained power in West Bengal following the Trinamool Congress' landslide victory in the Assembly polls.

Dhankhar's meetings with the President and Union Home Minister assume significance because it was expected that the West Bengal Governor, who has been vocal on the 'deteriorating' law and order situation in the state, would brief them about the state government's 'silence' on the issue.

Dhankhar had visited several parts of the violence-hit state after the announcement of election results on May 2 and had spoken to the people.

"The entire details of his experience in the violence affected state have been given in a report," a source close to the Governor said, adding that Dhankhar is likely to submit the report in Delhi.

(The above story first appeared on LatestLY on Jun 18, 2021 11:48 AM IST. For more news and updates on politics, world, sports, entertainment and lifestyle, log on to our website latestly.com).