The petition in the top court has asked to pass an order directing the CBI to launch an inquiry and investigate the instances of "rampant violence, murders, and rape that have been carried out by the workers of Trinamool across the state". Trinamool has retained power once again in West Bengal, but Mamata Banerjee lost in Nandigram to her ex aide Suvendu Adhikary. 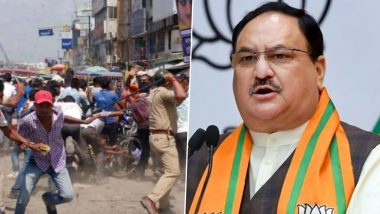 New Delhi, May 4: BJP spokesperson and senior advocate Gaurav Bhatia on Tuesday moved the Supreme Court seeking a CBI probe into the episodes of violence which erupted in West Bengal after the declaration of Assembly election results on May 2 in which the ruling Trinamool Congress cruised to a landslide victory. 'West Bengal Assembly Election Results 2021 Show People Rejected BJP's Politics of Polarization'.

The plea said: "The instant application has been preferred by the petitioner to bring to the notice of this court the brutal murders and commission of serious crimes like rape and molestation, blatant violence and the complete breakdown of the law and order machinery in the state of West Bengal, during and after the recently concluded Assembly elections." Citing media reports, Bhatia alleged in his plea that the violence is directly sponsored by the ruling party through its workers who are seeking revenge against the citizens of the state who exercised their democratic right to vote for a party other than the Trinamool.

The BJP leader also cited the "murder" of one Avijit Sarkar in Kolkata, stating that it was "proof enough to highlight as to how there is a great dance of democracy that is currently underway in West Bengal under the protection of Trinamool Congress". "Sarkar in a video uploaded on Facebook moments before his death highlighted how the Trinamool workers not only ransacked his house and NGO but also mercilessly killed voiceless puppies. Sarkar specifically blamed the Trinamool leaders for the attack and eventual death," added the plea. BJP MP Parvesh Sahib Singh Asks CM Mamata Banerjee To Stop Violence in West Bengal, Warns TMC Leaders Will Be Treated Similarly When They Visit UP, Bihar.

The plea further argued that it is clear that the Trinamool has been exercising undue influence over the police and other law enforcement agencies inasmuch as no FIRs have been registered against any alleged party workers for their acts of crime. "The Trinamool has dehumanized its political opponents, specifically targeting the BJP and its members and workers, branding them as fascists and bigots," read the plea. Besides demanding a CBI probe, the plea also sought directions to the West Bengal government to file a detailed status report with respect to the FIRs registered, arrests made, and steps were taken by it against the perpetrators of the crimes.

The petitioner urged the top court to allow the present application and pass an order directing the CBI to launch an inquiry and investigate the instances of "rampant violence, murders, and rape that have been carried out by the workers of Trinamool across the state".

(The above story first appeared on LatestLY on May 04, 2021 06:20 PM IST. For more news and updates on politics, world, sports, entertainment and lifestyle, log on to our website latestly.com).