FanRoom Live Was a Lifeline During the Pandemic, Jeff Krauss Fills Us in on What's Next for the Digital Platform

FanRoom was a vital lifeline for celebrities and entertainers to interact with their diehard fans during the unfortunate covid lockdown. Now that things are returning to normal, Jeff Krauss, an executive with the digital platform, says the popular website will remain an integral part of the post-pandemic entertainment future. 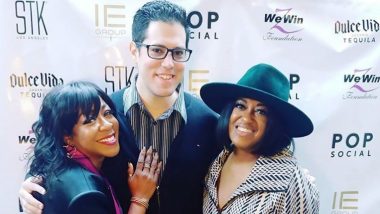 FanRoom was a vital lifeline for celebrities and entertainers to interact with their diehard fans during the unfortunate covid lockdown.  Now that things are returning to normal, Jeff Krauss, an executive with the digital platform, says the popular website will remain an integral part of the post-pandemic entertainment future.

Celebrity fan interactions, such as meet-and-greets, are the core of how entertainers engage their base and earn income.  The pandemic created a void that forced the industry to sweepingly adapt. Meetings evolved into the virtual sphere, streamed on Zoom, YouTube, Facebook, Twitch, and similar outlets.

“The problem with streaming celebrity meet-and-greets on social platforms is that most of these platforms are not optimized for such activities,” explained Jeff Krauss, a veteran hospitality and entertainment entrepreneur, and one of the initiators of FanRoom Live. “If people have to pay to hang out with their favorite celebrities from the comfort of their homes, it only makes sense that the experience closely mirrors physical in-person meetings.”

Krauss helped solve this conundrum by partnering up with actor/comedian Cedric the Entertainer and Mich Faulkner,  the CEO of 123 Talent, to launch FanRoom Live.  The digital platform hosts celebrity meet-and-greets, offering fans the avenue to hang with their idols from the comfort of their home. FanRoom quickly gained a  great following among actors, athletes, musicians, authors, comedians, celebrities, influencers, and their fans.

Jeff Krauss, his partners, and the exceptional team behind FanRoom have been a major factor in the digital platform's unprecedented success. Few of these names include Co-Hosts & Co-EPs actor and comedian Jae Benjamin and producer Stacey Toy, among others. For Krauss,  the entertainment sector is familiar territory. Since 2006, he’s been involved with IE Group, a company he founded for creative event planning services, branding and marketing, VIP services, celebrity & influencer marketing, and charity events management.

Working alongside a team of other highly resourceful individuals, Krauss and his partners have navigated the FanRoom platform to success. FanRoom Live helped celebrities remain closer to the people who matter most to their craft in a time of isolation. And for fans who became increasingly lonely and isolated as the pandemic persisted, the platform served as an entertainment therapy of some sort. The platform also helped raise money for charities with some of the proceeds generated from the meetings. So, while fans get their entertainment fix easily, they’re simultaneously contributing to a great social cause.

FanRoom has played host to some of entertainment’s biggest names since its launch. Veteran actress, Morgan Fairchild recently hosted a meet ‘n’ greet with her fans where she went one-on-one with fans on her exploits since moving to New York as an aspiring actress in 1973 to landing roles in blockbusters. Fans also got a glimpse of her personal and family life, details of a nostalgic and emotional trip to Scotland with her sister, tidbits about her roles in movies, and her future engagements for the remainder of the year.

Actor and wrestler, Paul ‘Big Show’ Wight also hosted a special edition of FanRoom Live recently. The entertainer contracted to the All Elite Wrestling  (AEW) and slated to run commentary for AEW Dark: Elevation showed his ‘big’ heart on the show when he donated his worn shirt in a kind gesture to support kids with Cancer and Cerebral Palsy. That special show was organized in partnership with Wrestling for Warriors, a charity organization fighting for children with disabilities and terminal illnesses.

Several other big-name celebrities to have graced the platform include Pretty Little Liars and Fifty Shades of Freed's star, Brant Daugherty, actress Holland Roden, Cedric The Entertainer, D.L. Hughley, George Lopez, Jake “The Snake” Roberts, Kurt Angle, Ice T & Coco, R&B sensation ZIEME, rock stars Kenny Aronoff and Leland Sklar, among others. FanRoom continues to add even more names to its platform. And for a platform that does well to highlight the positive force of entertainment, FanRoom’s successes should come as no surprise.