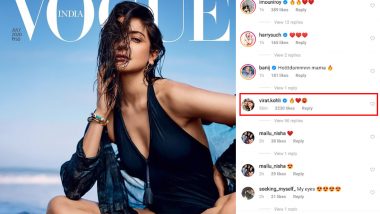 Anushka Sharma is back to posing for magazine covers and this one belongs to the very prestigious, Vogue India. While the actress in her is resting these days, Sharma is making headlines for her different production ventures. She rightfully deserves to feature on a new edition and the reasons for which are valid enough. Taking a dip in the Goan sea while flaunting her uber hot bod sounds equally dreamy and Virat Kohli has the perfect reaction for it. The Zero actress took to her Instagram account to share her new magazine cover and hubby Virat left a rather flirty comment on it. Anushka Sharma and Virat Kohli Are the Cutest 'Chhole Bhature' Loving 'Hamesha Ke Liye' Couple in Their New Commercial Together (Watch Video).

Without saying much or using too many words, the Indian skipper simply picked three emojis that would convey his emotions. The doting husband is certainly loving his wife's sexy picture and doesn't hesitate in revealing his reaction to it. We wonder if Anushka is blushing after reading his comment for we are certainly gushing about his reaction. The Bulbbul producer sizzles in her black monokini as takes a dip in the ocean for her new magazine cover. While her picture is the hottest and there are no two ways about it, we are happy to realise Kohli's validation for the same. Anushka Sharma Sizzles Amidst the Blue Sea As She Dons the Sexiest Monokini for Vogue’s July 2020 Issue (View Pic). 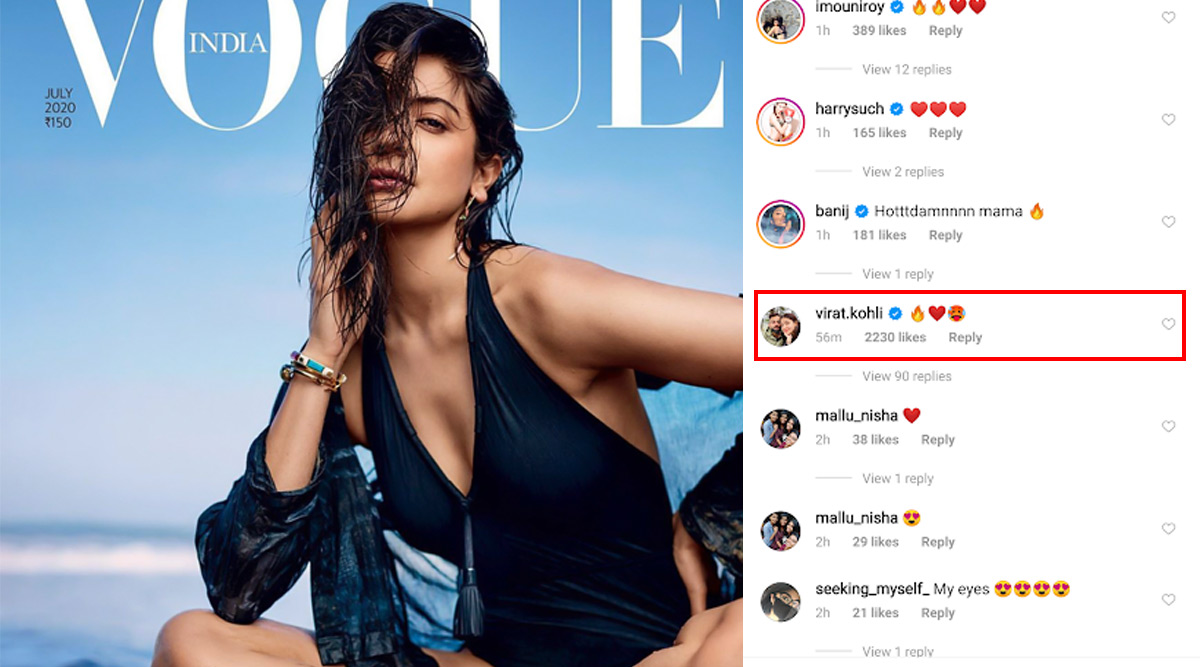 Virat has been a supportive partner throughout - encouraging Anushka and cheering for her recent productions. While lauding her choices as a producer, Virat had praised Anushka's instincts by saying, "Her making choices of what she wants to do as a project, as a film, as an actor or a producer, comes from the right place. She is a person who always does the right thing. She follows her instincts and she follows it to the tee. She is absolutely fearless. When she does that, she believes in that project, & I think that is key and that is something I've learnt looking at her." Adorable, isn't it?

(The above story first appeared on LatestLY on Jul 01, 2020 12:10 PM IST. For more news and updates on politics, world, sports, entertainment and lifestyle, log on to our website latestly.com).