The actress earlier has shared an Instagram story where we could see her dressed in a white ensemble. She paired it with a beautiful necklace and minimal makeup. 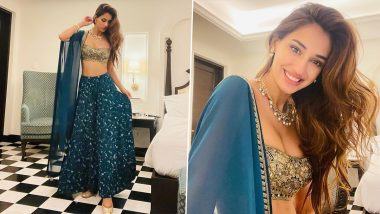 Disha Patani was all over the news when she announced that she will be a part of Ek Villain Returns and will be reuniting with Mohit Suri once again after Malang. The actress shared the excitement for the new project on social media and soon after the announcement, flew out of the town to attend a friend's wedding. The actress has been sharing stories on Instagram from the wedding and she seems to be having the time of her life at the wedding. Disha Patani Looks Hot & Chic During Baaghi 2 Promotions: 10 Summer Styles in Pictures You Can Recreate Easily.

The actress earlier has shared an Instagram story where we could see her dressed in a white ensemble. She paired the outfit with a beautiful necklace and minimal makeup. The actress is seen dancing with her friends as the baraat reaches the venue. In another post, the actress posted a few pictures of her outfit that she chose for another function. Disha opted for a navy blue lehenga paired with a golden blouse and dupatta that looked absolutely stunning on her. The skirt had a marble print on it while the blouse was embellished with golden and blue embroidery. The hem of the dupatta also had golden detailing on it.

Disha added a piece of chunky jewellery to go with her outfit. The necklace had pearls hanging on a golden chain. She added similar-looking pearl earrings to the outfit as well. Talking about the makeup, the Malang actress did it herself. She went very minimal with it and went for a nude lipstick, brushed eyebrows, golden eyeshadow to accentuate her features. Disha added golden bangles in one hand and complemented the outfit with a pair of golden jootis.

Workwise, Disha will next be seen in Radhe: Your Most Wanted Bhai alongside Salman Khan. The film also has Randeep Hooda essaying a pivotal role and is directed by Prabhudeva. The film is slated for a theatrical release on Eid this year. Radhe will mark Disha's second collaboration with bhai after Bharat. She will also be reuniting with Mohit Suri for Ek Villain Returns. The makers are looking for a February 11, 2022 release date for the movie. Disha Patani Called 'Ugly' in School Pic: We are Disgusted With the Media House But Disappointed by Disha's Reply.

The story of Ek Villain Returns will have two villains pitted against each other. John Abraham supposedly will also have a romantic arc. He will also be seen performing combat scenes and specialised action in the film. Apart from this, Disha will also be seen in KTina, produced by Ekta Kapoor. The film also features Akshay Oberoi and Sunny Singh.

(The above story first appeared on LatestLY on Feb 18, 2021 11:04 AM IST. For more news and updates on politics, world, sports, entertainment and lifestyle, log on to our website latestly.com).