Cristiano Ronaldo has opened a luxury hotel in Madrid on June 7, 2021. The footballer's girlfriend Georgina Rodriguez has taken to her Instagram handle to share a few stunning pictures from the luxury hotel. 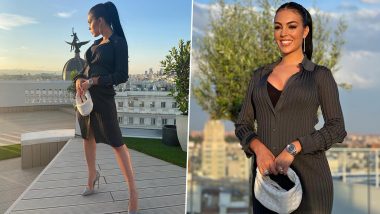 The Portuguese international footballer Cristiano Ronaldo’s girlfriend Georgina Rodriguez is an avid social media user. She often shares alluring pictures of her on her official Instagram handle to keep her fans hooked. Georgina is considered to be one of the sought-after models. She has over 24 million followers on Instagram. She never misses a chance to grab eyeballs with her interesting posts. Now recently, Georgina has taken to her social media handle to share a few gorgeous pictures of her from her partner footballer Cristiano Ronaldo’s new luxury hotel in Madrid.

The Italian star of Juventus Turin opened a new luxury hotel in the heart of the Spanish capital Madrid on June 7, 2021, under his famous “CR7” chain. Now, Georgina shared a few stunning pictures of herself from the dream hotel of Cristiano Ronaldo. In the pictures, the gorgeous model can be seen wearing a grey-hued shirt dress and she is looking super-chic in the same. In another picture, she can be seen candidly posing for the camera with Cristinao Jr. Along with the pictures, Georgina also wrote a congratulatory note in the Spanish language for Cristiano. Her post read as, “Opening of this dream hotel in the heart of Madrid... I am still amazed at what you are doing. With a lot of effort and courage, I invite you to discover this space that will inspire you and make your dream. “

According to the News Beezer report, Cristiano has opened his new hotel on Gran Via, the most famous street in the Spanish capital. Reportedly, the famous footballer has invested around 13 million euros in this hotel, which is his first outside of Portugal. The hotel has 168 rooms and it is located in a historic library building from 1923 in the center of Madrid. The hotel consists of 10 floors, in which two of the floors are occupied with bars, restaurants, and a swimming pool.

(The above story first appeared on LatestLY on Jun 08, 2021 02:23 PM IST. For more news and updates on politics, world, sports, entertainment and lifestyle, log on to our website latestly.com).