Karisma Kapoor Turns Up the Heat Wearing a Black Monokini in her 'Summer-Ready' Post - View Pic! 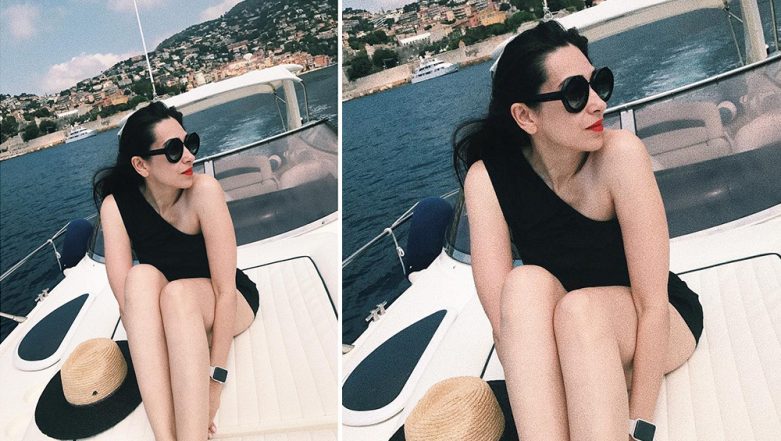 Karisma Kapoor surely knows how to enjoy summer. The actress is setting temperatures higher with her latest picture on Instagram. She recently delighted her fans with a throwback image of herself from one of her latest holidays as she posed on a yacht among the Blue waters in a one-shoulder monokini.

The image was captioned, "Ready for summer". We have to say, the 44-year-old star looked absolutely stunning in her black monokini and we bet it is impossible to take your eyes off her. The actress is seen sitting on the yacht sporting oversized shades and also has a Hat beside her. The picture makes her look like one of those gorgeous models from vintage eras. We love how she chose to go for the red lipstick that makes her look even better. Kareena Kapoor Khan, Karisma Kapoor Ring in Mother Babita's Birthday With a Vacation, Pose Together with Kids Taimur, Kiaan and Sameira - View Pic.

Naturally, this picture of her had fans going all gaga over her stunning look. The actress is known for her films in the 90s. She starred in several popular films such as Raja Hindustani, Dil Toh Pagal Hai, Coolie No. 1, Judwaa and others. Too Hot for Instagram! Hina Khan Flaunts Her Sexy Curves in Striped String Bikini With Kasauti Zindagi Ki Co-Stars.

Karisma was last seen in a cameo in Shah Rukh Khan, Anushka Sharma and Katrina Kaif starrer film, Zero. She was seen in a scene featuring Sridevi, Kajol and Rani Mukerji, who all had a brief cameo in the film.