Chaturmas is a holy period of four months that starts from the day of Devshayani Ashadhi Ekadashi. The pious phase is dedicated to devotion, penance, bathing in sacred rivers, eating vegetarian food, performing sacrifices, and charity. While good work is forbidden during Chaturmas, religious works can continue. 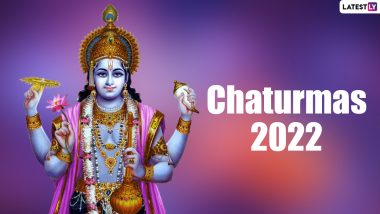 In the traditional Hindu Calendar, on the eleventh day of the bright half, Shukla paksha of Ashadha month, people mark the pious festival of Shayani Ekadashi. Also known as Ashadhi Ekadashi, Maha-Ekadashi and Devshayani Ekadashi, the day marks the commemoration of Lord Vishnu's slumber. God Vishnu goes into a state of meditation for four months, starting from the day of Devshayani Ashadhi Ekadashi. The Yoga Nidra period of Lord Vishnu is considered very holy in Hinduism. It is called Chaturmas, which concludes on the Ekadashi Tithi of Kartik, Shukla Paksha. Chaturmas means "four months", derived from the Sanskrit term 'catur' which means four and 'masa' which means month. The four-month Chaturmas ends on the day of Devuthani, or Prabodhani Ekadashi which will be celebrated on Friday, 4 November 2022. The pious Chaturman 2022 will start on Sunday, 10 July.  Ashadhi Ekadashi 2022 Date in Maharashtra: Know Shubh Muhurat, Devshayani Ekadashi Beliefs, Vrat Traditions and Significance of Celebrating the Lunar Month Festival.

It is believed in the Chaturmas period Lord Vishnu rests on the coiled body of his serpent, Shesh Naag, in the Kshirasagara or the cosmic ocean of milk. During the auspicious time, the sun enters the zodiacal sign of Karka or Cancer and starts to move southwards in the month of Ashadh. There are tons of religious festivals which are marked during Chaturmas. Starting from Guru Purnima to Champa Sashthi in Maharashtra, the holy phase consists of many great Hindu observances. However, during these four months, no auspicious personal occasions like child's head tonsuring, marriages, engagement ceremonies, naming functions, or housewarming programs are planned.

The Chaturmas period is considered important for Sanyasis, ascetics or saints. The Sannyasis usually avoid much movement during the period to prevent harming any lifeforms in nature. One must refrain from lying or performing actions to torment others during Chaturmas. Also, milk, brinjal, leafy vegetables, oil, salty or spicy food, meat and alcoholic beverages, etc., should not be consumed during this fast. To please Lord Sun, people often sleep on the ground instead of in bed. Some folks also hold the faith that worshipping Goddess Tulsi during Chaturmass help to end the suffering of poverty.

(The above story first appeared on LatestLY on Jul 07, 2022 04:06 PM IST. For more news and updates on politics, world, sports, entertainment and lifestyle, log on to our website latestly.com).