Ashadha Shukla Paksha Ekadashi is known as Devshayani Ekadashi, which is celebrated on the eleventh day in the bright half of the Hindu month of Ashadha. Devotees decorate the idol of Lord Vishnu and keep vrat on the holy day. The Ekadashi marks Lord Vishnu’s slumber period, which continues for four months. 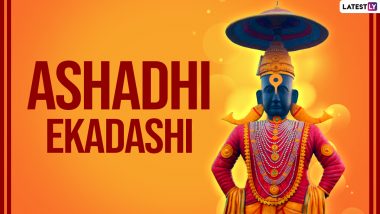 The eleventh lunar day of the bright fortnight, i.e. Shukla paksha of the Hindu month of Ashadha maas, is celebrated as Ashadhi Ekadashi. There are mainly two kinds of Ekadashi in every lunar month, out of which, one is observed in the waxing phase and the other during Krishna Paksha or the waning phase. The festival is also known as Devshayani Ekadashi, Toli Ekadashi by Telugu speaking population, Padma Ekadashi, Devpodhi Ekadashi, Maha Ekadashi, or Hari Sayana Ekadashi. According to the Hindu calendar, Ashadhi Ekadashi 2022 will be celebrated on Sunday, Jul 10 which is also the start of Chaturmas. In short, Chaturmas is the holy period of four months in Panchanga. Let's dig into the vital vrat customs, tithi, importance and reason behind marking the Ashadha Shukla Paksha Ekadashi. Greetings, Lord Vishnu Images, Facebook Status, SMS to Send Wishes on This Auspicious Day.

People believe that on the day of Devshayani Ekadashi, Lord Vishnu falls asleep in the cosmic ocean of milk, Ksheersagar, on his divine serpent Shesha Naga. God Vishnu wakes up from his slumber on the day of Prabodhini Ekadashi, which falls four months (Chaturmas) after the Ashadha Shukla Paksha Ekadashi. On the day of Maha Ekadashi, devotees get up early in the morning and take a bath before worshipping Lord Vishnu and his consort, Devi Lakshmi. Some people also keep the Hari-Ekadashi fast that is broken during the Parana period on the next day. July 2022 Holidays Calendar With Festivals & Events: Puri Rath Yatra, Eid al-Adha, Doctors' Day, US Independence Day, Check Full List of All Major International Dates and Indian Bank Holidays for the Month.

According to drik panchang, it is necessary to do Parana within Dwadashi Tithi unless Dwadashi is over before sunrise. People decorate the idol of God Narayana with ornaments and offer it betel leaf, betel nut, yellow flowers, sandalwood and fruits. During mid-day, families also perform rituals to pay homage to the souls of deceased ancestors and let them rest in peace. On Ashadi Ekadashi, devotees also chant religious bhajans or songs praising Lord Vishnu and recite religious books like Vishnu Sahartanaam with utmost devotion.

(The above story first appeared on LatestLY on Jul 06, 2022 04:52 PM IST. For more news and updates on politics, world, sports, entertainment and lifestyle, log on to our website latestly.com).