Epiphany is celebrated on January 6. The day marks the final celebratory day of the Christian holiday season. The holiday is originated in the Eastern church, where it initially included a commemoration of the birth of Christ. Read more to know about the origin of the Christian festival and how you should celebrate it. 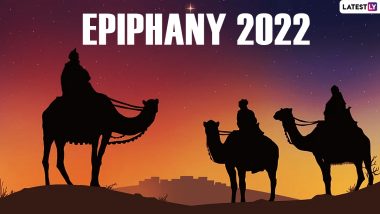 Epiphany is a Christan festival which is also known as Feast of the Epiphany, Theophany, or Three Kings' Day. The festival is celebrated on 6th January and is a time of joy and faith. Epiphany is one of the three major Christian celebrations along with Christmas and Easter. According to the U.S. Library of Congress "Epiphany is a holiday that commemorates "the manifestation of Jesus Christ to the world and the coming of the Magi". In many Western Christian Churches, the eve of the feast is celebrated as 'Twelfth Night' i.e Epiphany Eve. The Monday after Epiphany is known as Plough Monday. January 6, 2022: Which Day Is Today? Know Holidays, Festivals and Events Falling on Today’s Calendar Date.

Epiphany is derived from the Greek word 'epiphaneia' and means manifestation. In the Bible, the Epiphany is Jesus’ visit from the Magi or three kings, from the east followed a star to see the newborn baby Jesus in Bethlehem. By the 4th century AD, various calendar reforms had moved the birth of Jesus Christ to December 25th and the church in Rome began celebrating January 6th as Epiphany.

The message of Epiphany can be interpreted in many ways. Some believe it is a message of faith in divine light, which guided the Magi to Bethlehem. Others interpret it as a celebration of Jesus coming to unite the world as the true “king of kings”. In Britain, tradition says that Christmas decorations like the Xmas tree stay up until Twelfth Night, which marks the beginning of Epiphany.

How And When Do You Celebrate The Epiphany?

(The above story first appeared on LatestLY on Jan 05, 2022 04:52 PM IST. For more news and updates on politics, world, sports, entertainment and lifestyle, log on to our website latestly.com).