With round the clock travelling and so much competitiveness, we sometimes forget the athletes too are humans and they too share deep bonds with each other. This is what is brilliant about games is that it brings people together. The other important aspect of friendships in sports is that it generates a lot of buzz with the fans. 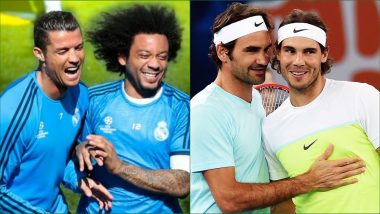 It's Friendship Day 2019 today. And we are going to talk about some of the biggest names (from Cristiano Ronaldo-Marcelo to Rafael Nadal-Roger Federer) in sporting history who also happens to be best friends in real life. In a highly competitive world of sports, there are some friendships that continue off the field too. With round the clock travelling and so much competitiveness, we sometimes forget the athletes too are humans and they too share deep bonds with each other.  This is what is brilliant about games is that it brings people together. The other important aspect of friendships in sports is that it generates a lot of buzz with the fans. People like reading about it and these friendships always get a lot of media coverage. Let us have a look at some of the great modern-day friendship in sports. Virat Kohli-Shikhar Dhawan to Sachin Tendulkar-Sourav Ganguly, 6 All-Time BFFs in Indian Cricket Team's Dressing Room!

Rafael Nadal and Roger Federer have been competing against each other for the best part of 14 years now, but they are close friends off the court. Two of the greatest players to grace the game of tennis, their mutual admiration for each other is a role model for all budding athletes on how to conduct themselves. The duo often play together in charity events and have also done advertisements together. They never miss an opportunity to praise each other and such is their friendship, it has created a new term in the press – FEDAL.

Champion tennis player Serena Williams and former world no 1 Caroline Wozniacki are the best of friends. Despite fighting for the honours in the game, they have never let the pressure of sports come in the way of their friendship. Serena Williams was the bridesmaid when Caroline Wozniacki married former NBA star David Lee in June 2019 and during her difficult times when she broke up with golfer Rory Mcllroy, Serena was there by her side. They are often pictured together at events speak highly of each other.

Two legendary batsmen and fierce rivals brought together on the same platform by the Indian Premier League, Virat Kohli and AB De Villiers are the best of friends. Playing for the RCB franchise, they have won innumerable games playing together and their camaraderie makes it easier for them to strike partnerships. In advertisements and media events, you will often find them sharing laughter and praising each other games. ABD recently broke his silence on the whole World Cup 2019 selection drama and Virat Kohli was one of the first to come up with his word of support for the former Proteas skipper.

Hardik Pandya and K L Rahul landed themselves in trouble with the whole Koffee with Karan controversy but that has not strained their friendship which continues to grow. The two young cricketers have a lot of potential in them and enjoy each other’s success. Off the field, the love for flashy life in fast lane has given them common grounds. They are often pictured partying together and the bond they share there is on similar lines to one on the field.

Brazilian Marcelo admitted he cried when best friend Cristiano Ronaldo made a move to Juventus last season from Real Madrid. The buddies enjoyed a wonderful decade long spell at Los Blancos together winning every tittle there is to claim and their celebrations on the ground was a treat to watch for the fans. Marcelo assisted Ronaldo several times during his spell at Madrid and such is their friendship, the Portugal captain tried getting his best friend to Italy as he missed playing with him.

Being friends and competitors at the same times, these athletes have shown the world how not to mix their professional and personal commitments and stay at the top of their game.

(The above story first appeared on LatestLY on Aug 04, 2019 12:09 PM IST. For more news and updates on politics, world, sports, entertainment and lifestyle, log on to our website latestly.com).