Independence Day 2020: Indian Tricolour Flag to be Hoisted in Iconic Niagara Falls in Canada on August 15 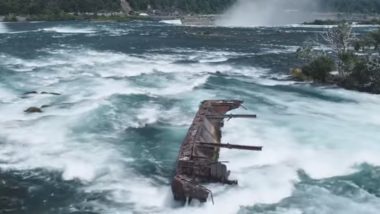 Ontario/New Delhi: With India all set to celebrate the 74rd Independence Day on Saturday, the Indian national flag will also be hoisted at the iconic Canadian landmark of Niagara Falls for the first time. Apart from the iconic location, the tricolour will also be featured over the 553-metre-high CN Tower in Toronto and the Toronto sign will be illuminated in Indian tricolour.

Confirming the news, India’s Consul General to Toronto Apoorva Srivastava said, as quoted by Hindustan Times, "It is a matter of great pride that this Independence Day, iconic locations like Niagara Falls, CN Tower and the Toronto sign will be illuminated in Indian tricolour." Independence Day 2020: NOTAM at Delhi International Airport Only For Chartered Flights, No Transit Flights to Land During These Timings on August 15; Check Details.

Amid the coronavirus pandemic, traditional hoisting event of the Indian flag at the Indian High Commission in Ottawa and the Consulates in Toronto and Vancouver will be online. Informing more, Srivastava stated that the flag-raising at Niagara will take place on the evening of August 15, while it will flutter over CN Tower on Sunday. However, the Toronto sign will be illuminated in Indian tricolour on both Saturday and Sunday.

It is to be known that 'the India Day Parade' is being organised in Toronto which is a signature event for the community in the country. In 2019, the event attracted a crowd of a record 85,000 at its downtown venue. This year, the virtual event will showcase 10-minute videos which would comprise the culture and cuisine of the various parts of India.

(The above story first appeared on LatestLY on Aug 14, 2020 09:26 AM IST. For more news and updates on politics, world, sports, entertainment and lifestyle, log on to our website latestly.com).