International Beer Day 2020 Facts: Did You Know Beer Is Close Relative of Marijuana? 10 Interesting Things About the Age-Old Beverage Every Beer Drinker Should Know

Did you know that beer is a close relative of marijuana? As we celebrate International Beer Day 2020, in this article we bring you ten interesting and boozy fun things to know about the age-old beverage that every beer drinker should know! 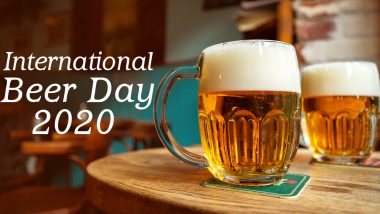 International Beer Day is celebrated on the first Friday of every August. The day was founded in 2007 by Santa Cruz in California by Jesse Avshalomov. The holiday first started in California with local bars joining in the celebration and today; it is celebrated in thousands of cities across the world. International Beer Day 2020 is August 7. From the Agricultural Revolution to the American Revolution, beer has been around to quench the thirsts of virtually all classes of all societies. Did you know that straws were invented by the Sumerians to actually drink beer? Did you know that beer is a close relative of marijuana? As we celebrate International Beer Day 2020, in this article we bring you ten interesting and boozy fun things to know about the age-old beverage that every beer drinker should know!

1. The oldest known recipe of beer is for a 4,000-year-old beer made by the Sumerians.

3. The study of beer is called Zythology. Yes. There is a study dedicated to the beverage. Zythology is the analysing of ingredients and the effect they have on the brewing process, the knowledge of beer styles and history, and the application of beer pairings.

4. The first professional brewers were all women. In ancient Peru, breweries were operated by ‘women of the elite.’

5. Ice-cold beer is not the best way to serve beer. While there is no one rule or temperature to aim for—the sensation of coldness inhibits the tongue’s taste receptors. So, when you over-chill your beer, you are numbing the palate to any nuances of flavours. However, it is worth noting that different beers are served at different temperatures around the world.  Two Grandmothers Demand More Beer and Wine During Lockdown, Wish Gets Fulfilled After Pics of Them Holding Plea Signboards Go Viral.

6. Hops, the bittering agent in beer, belong to the family of Cannabaceae, which makes them marijuana's close cousins.

7. Monks in the sixth century C.E. are believed to have made advances in brewing. It was the monks who discovered the benefits of adding hops as a preservative in beer.

8. Researchers in Stanford found that beer bubbles create a gravity-defying loop. Bubbles head up in the centre where frictional drag from the glass is less and down on the outside, as the top part gets crowded.

Now that you know these fun facts about beer, raise a toast and celebrate your favourite beverage. Happy International Beer Day 2020, everyone!

(The above story first appeared on LatestLY on Aug 06, 2020 07:00 PM IST. For more news and updates on politics, world, sports, entertainment and lifestyle, log on to our website latestly.com).